First up, a new blog - One Last Wargame - SPACE 1889 - which has just started,  The aim is to follow the design an progress of a Space 1889 project.  It's off to a promising start.

And talking of VSF, one of my favorite blogs has returned after a fourteen month hiatus.  Yes, Colonel O'Truth's Miniature Issues is back!  And as bonkers as ever, with the build of Lord Smudgington Smythely-Smythe's Hydraulically Motorvated Sextupedal Land-Traversing Vacational Domicile continuing.

The Wit and Wisdom of Spock

Secondly, following the death of Leonard Nimoy there's been much talk of the inspiration and legacy provided by Spock.  It won't be any great surprise to readers of my blog to know that I'm a fan of Spock. 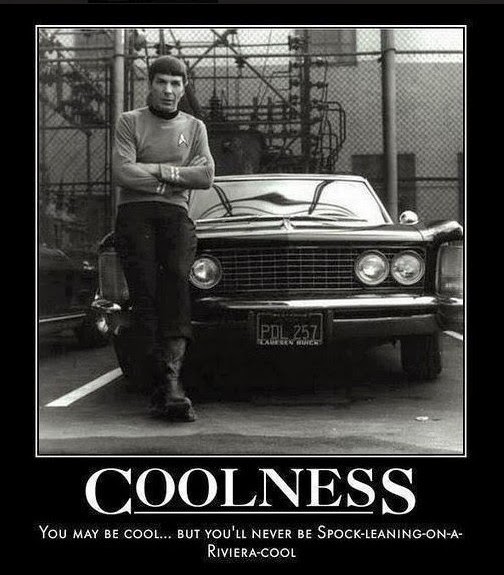 In among all the inspirational quotes and the cheesy memes, somehow, this one has been missed

Apologies for the lack of blog updates, which is down to business, some family health concerns and general lack of mojo.  But not only am I back but, as the subject of the post indicates, I've got some hobby stuff done. 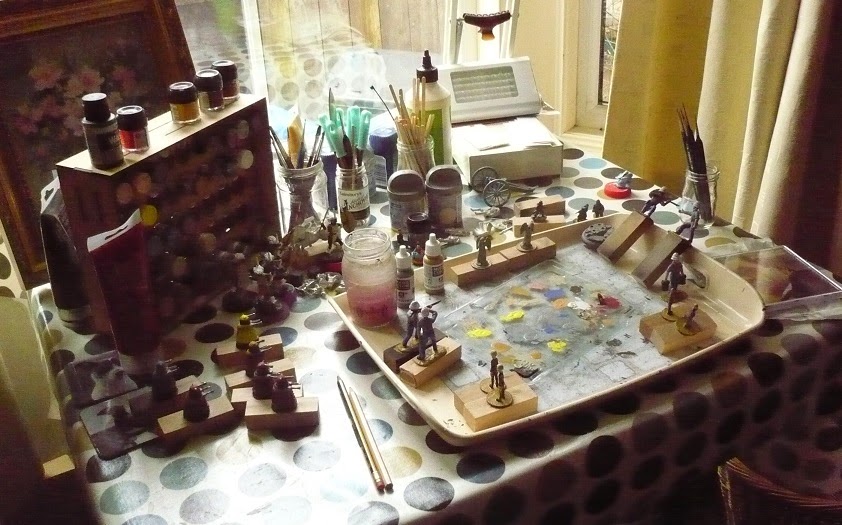 As some of you may be able to make out (I know that some like to pour over the details of these thing!) I'm on a bit of a Dr Who vibe again.  I hope to be able to submit some to the Painting Challenge on Tuesday.

The Dr Who theme means I'm again experiencing the delay gratification that comes from ordering from Black Tree Design - the order went in on 18 Feb and I'm still waiting.  Fortunately, there are other suppliers of lead satisfaction - an order that went in on the same day with NorthStar arrived two days later.  Equally, an order placed with Gripping Beast on Thursday arrived yesterday - my first order with GB, and I'm very pleased with the figures and speed of service.

With the latter, the Analogue Hobbies Painting Challenge FaceBook page deserves a shout-out.  Not wanting to to order BTD's UNIT figures I asked for a suggestion of British soldiers from the 60s and 70s.  Among the several helpful suggestions RoyW pointed me to GB's Falklands troops.  Although not perfect (I'd like something without Bergens if anyone knows of anything), they are very nice sculpts.  Also while on GB's site I found the TCWD Specials from Woodbine Designs - these include the NOT-cast from the Dr Who episode 'Family of Blood'.  So I've a few of those too!  They're so nice I might order the rest next.

I'm getting in a tangle describing what I'd like for UNIT.  These would have been perfect, but they're 1/72 scale. 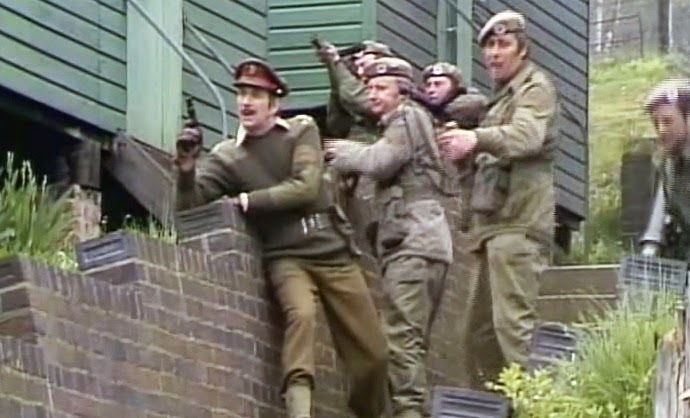 Now, many of you know that I have what can be charitably termed an antiquarian nature.  This, and my interest in the transitional (ie, from sail to steam) period of naval thinking in the second half of the nineteenth century was behind my decision to stock publications of the History of Wargaming Project over on Diplomatist Books.

It will come as no surprise then that the first of these (really quite interesting) publications I've set to read was John Curry (ed), Over Open Sights: Early Naval Wargaming Rules 1873-1904.   This book republishes and examines naval wargame rules presented at the Royal United Services Institute (RUSI). between those dates.  They are
Now these games are interesting in themselves (Bob Cordery has reported on some games of Lt Chamberlain's rules over at the Wargaming Miscellany, do have a look), but they weren't produced in a vacuum: the fact that they were presented at RUSI indicates that they were meant as professional tools.  I was therefore interested in what a theologian would term their Reception.  Did they change naval thinking?  Were they indicators of great things for these bright young thinkers?  The success of Jane's game is well-known, and Columb is a familiar name to those interested in naval tactics of the period, but what of Castle and Chamberlain?

Off to the book-shelves!  A quick check of the Naval Who's Who 1917 found no entry of Castle (it turns out that he died in 1916) and only a single line entry for Chamberlain - that he was the inventor of the Game of Naval Blockade (1888).  Disappointing, but it showed that the game was still worth mentioning in a professional publication some 30 years later.

Perhaps these junior officers had been commended for there initiative?  Fortunately naval officers service records are available to download from The National Archives' website - perhaps there wa a note of Their Lordship's Approbation?  No there wasn't.  Both had fairly routine careers.

William McCoy Fitzgerald Castle appears to have been very highly regarded by his superiors.  He is commended for his zeal and command of several languages - no mention of his tactics game though.  He was promoted to captain in 1885 and retired in that rank in 1898, at the time of his death in 1916 he was a Vice-Admiral on the retired list.

Henry Chamberlain had a much shorter naval career.  He retired in the rank of Lt-Cdr in 1880 due to poor health and became a lecturer in naval and military history.  He was probably helped there by the fact that his father was an admiral and he was nephew of Field Marshal Sir Neville Chamberlain and Gen Sir Crawford Chamberlain.  In fact his family connections proved to be the most interesting thing I could see about him.  One brother was a leading Japanologist and the other a racialist writer - much regarded by the Nazis - who married Wagner's daughter and became a German citizen in 1916.

And there I was going to leave it, until two rather stunning co-incidences occured, which threw a very interesting light on Castle and his game.

...and I shall write about that tomorrow. 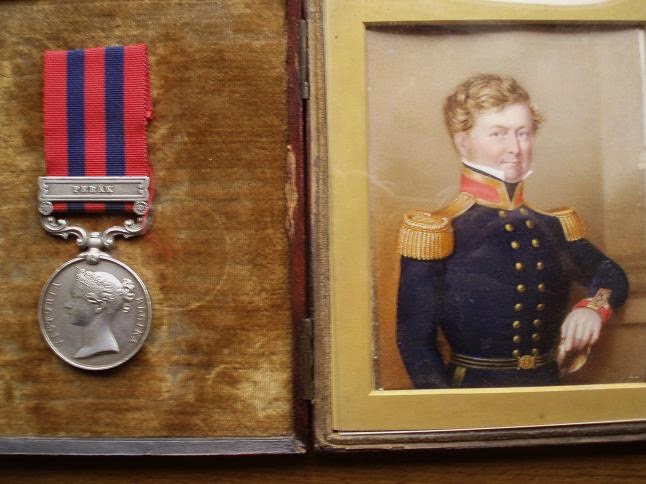 I really shouldn't be up blogging at 05:30, but what can you do when insomnia is with you and you don't want to wake the household? 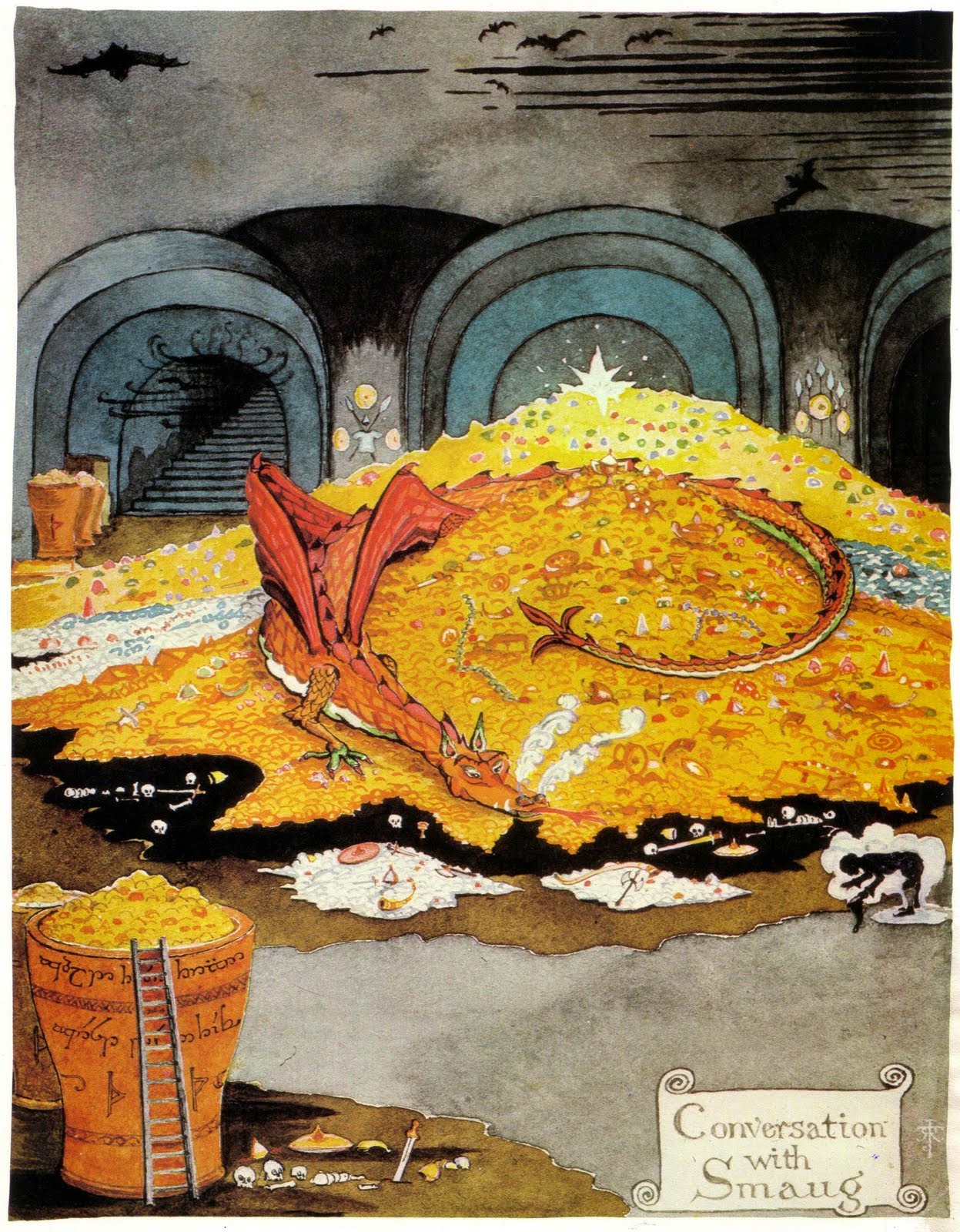 So I've been reading.  I don't go in for New Year Resolutions, but if I did this year's would have been to make more time to read.  I'm pleased to say that I managed it in January.  I read David Crane, Empires of the Dead, the story of Sir Fabian Ware and the early years of the Imperial Wargraves Commission, which was really an interesting read.  I'm also reading Room 40, the fascinating account of the RN's codebreaking section in WWI and re-reading The Hobbit (sadly alternating chapters with a commentary - Corey Olsen's Exploring JRR Tolkein's 'The Hobbit').  As my copy of The Hobbit is falling apart, on Monday I used a Christmas book-token to upgrade to a fancy hardback edition, along with other goodies.

As those who have chosen to follow Diplomatist Books' blog will know, yesterday I got a delivery of books from the History of Wargaming Project.  I couldn't resist starting Over Open Sights, which is about naval wargaming between 1873-1904 - the transistion of naval thinking in this period is one of my particular interests.

I'm not alone in this of course, Bob Cordery over at the Wargaming Miscellany has been play testing these nineteenth century rules and tweaking his Portable Naval Wargame.  I must say that I'm inspired to see if I can do any solo wargaming with ironclads.  The cost of tiny ships being what it is, I shall be going with some of the downloads from the Junior General - they have a nice selection of ironclads there, a great resource. 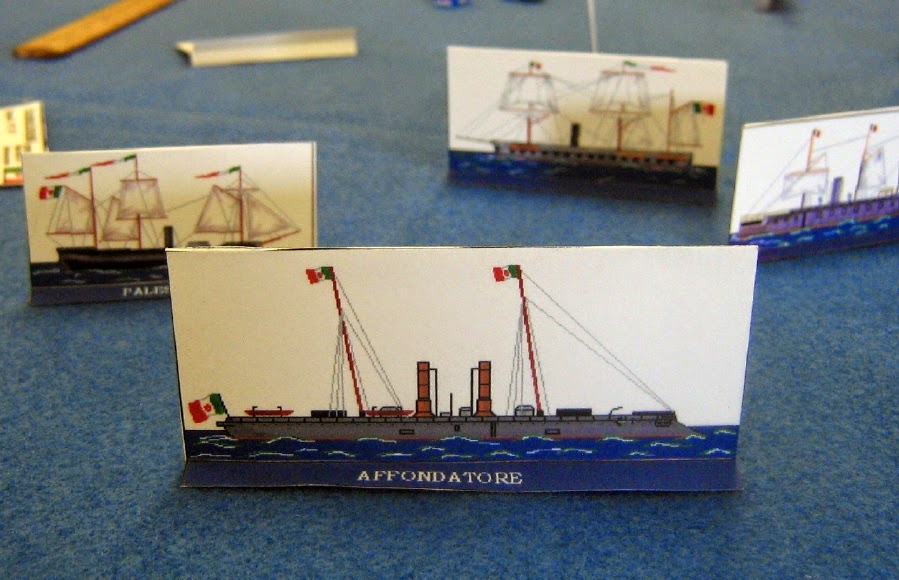 The blogging community is a brilliant place!  This week came news of not one but two great prizes from fellow blogger.  My own painting might have dried up, but there are some wonderful figures on there way to me.

Some of you will remember that before Christmas I took part in the Padre's very enjoyable play-by-blog game of Diplomacy.  An aspect Michael added to make it more fun was to have a commentary on his blog in the form of a newspaper, The Daily Dissembler.  We players (and others) were invited to contribute.  In the process of doing this, I invented 'Our Man in Rome' Ernest Harrington who reported on the goings-on of one Count de Graspi, general turned dictator.

This tickled the Padre's fancy, and he generously awarded me a prize for my efforts.  No less than a figure of de Graspi himself!  Read more about it here.

Last summer I won a give-away on Loki's blog.  My prize was to have ten figures of my choice painted up by him (those of you not familiar with the painting service he runs with the equally talented Kev Howroyd, should go across to Brigantes Studios). 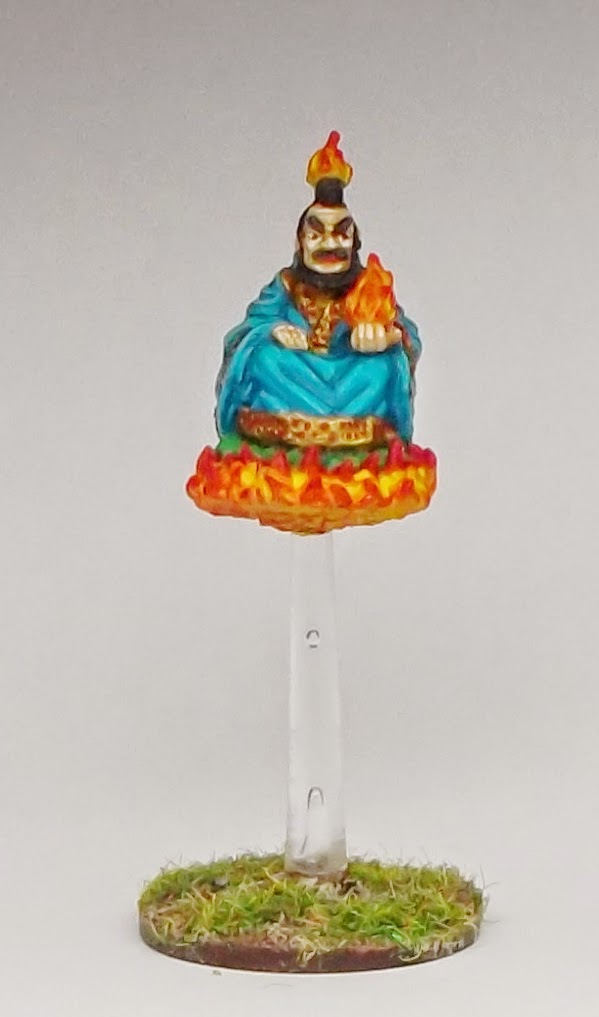 He's already showcased (is that a word?) the Chinese Wizard I chose (from Black Hat Miniatures' brilliant 'Tales of the Dragon Kings' range) and now he has finished the rest of the figures.  Left to my own devices I would have chosen some Kung-Fu types, but I promised The Wife she could pick, and she plumped for Lord Curr's Company from Northstar.

And look what a job Loki has done with them! 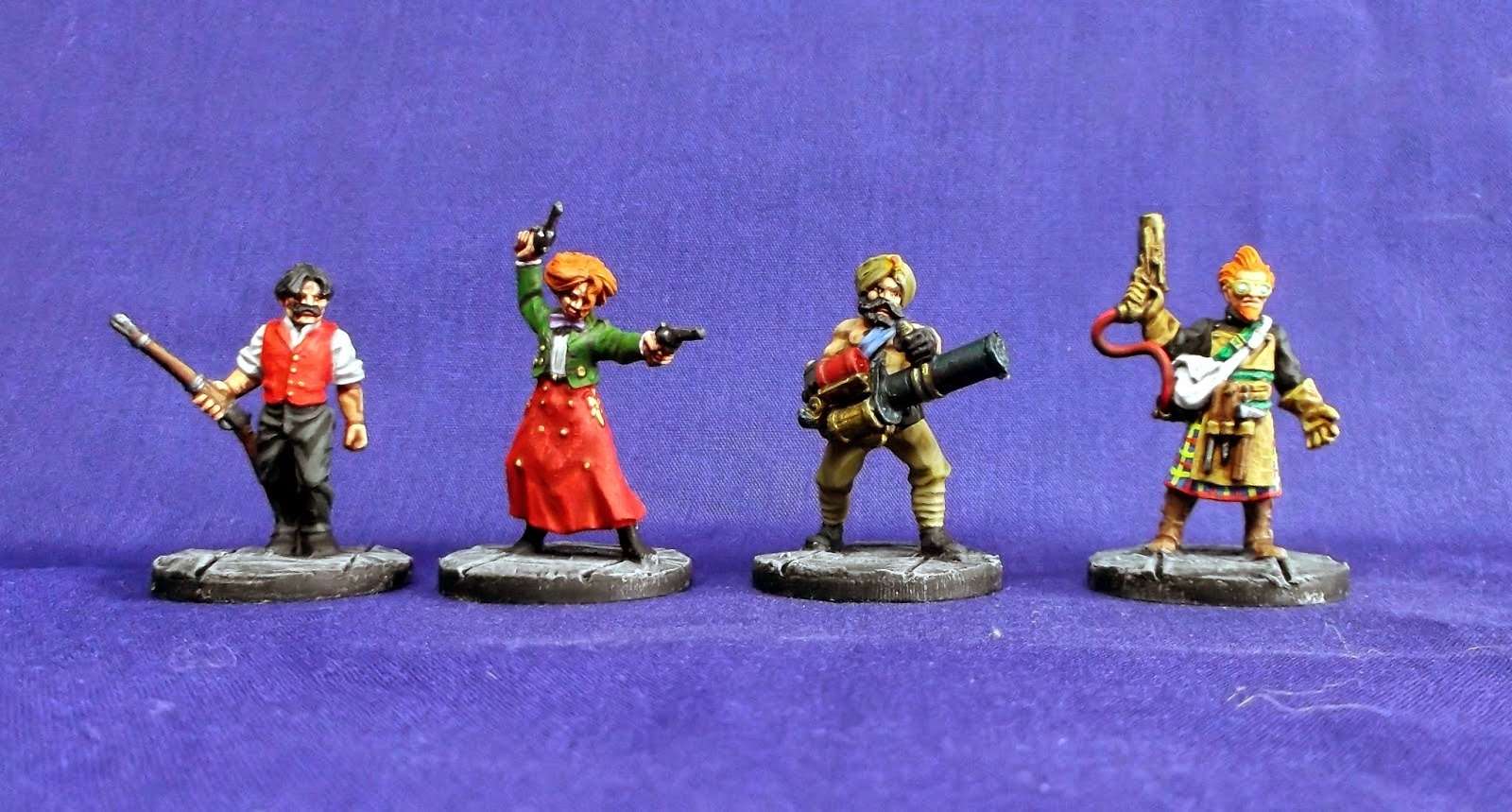 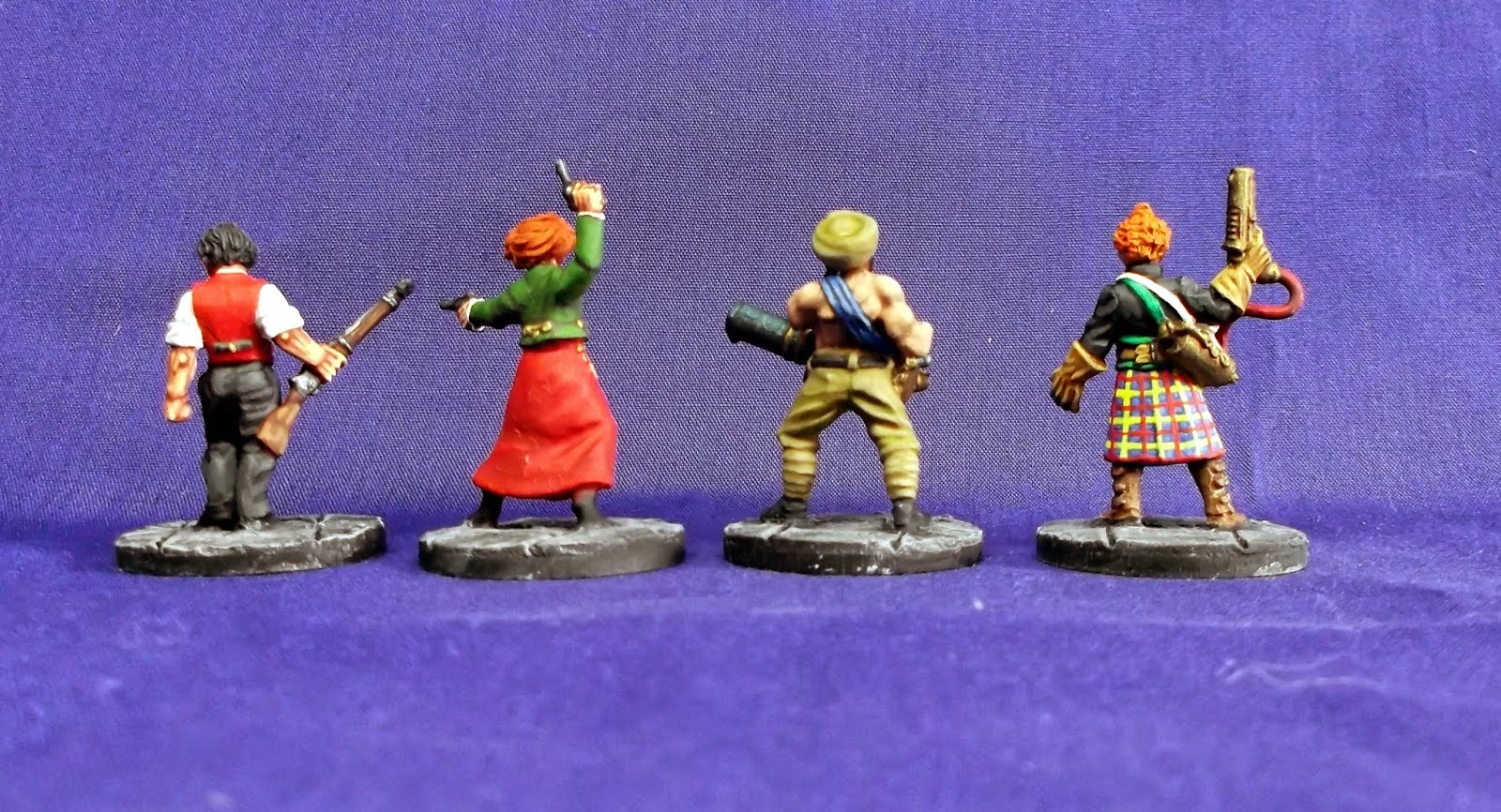