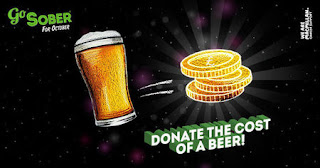 Well, I'm in the final stretch of my sober for October challenge, raising money for Macmillan Cancer Support   Thank you everyone for your support.   If you feel able to, please give me a boost by making a donation - the price of a pint of beer sounds reasonable.

Donations can be made at my giving page.  Cheers!

No Zomtober This Week - But Noggin!

I doubt very much whether I'll be posting anything for Zomtober this weekend.

I have done any painting this week, and I'm feeling so awful at the moment I can see any being done over the weekend.

On the bright side, there is a rather nice Kickstarter going on, which may warm the cockles of the heart of anyone who was in the UK during the late 60s and 70s.

Yes, it's Noggin the Nog!

Sadly, given the above-stated 'feeling so awful' situation, my immediate thoughts were on the grumpy side of negative:


If you aren''t as grumpy as I am, go and have a look at it here - a month left to run and already fully-funded. 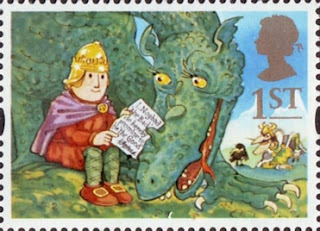 To comply with the not-very-demanding Zomtober rules, these should really have been posted yesterday.  I'm sorry about that - they just weren't ready.

As a bit of compensation, I can offer no less that four (yes, that's right, four!) Zeds instead of the one-a-week I'm managed so far during the month. 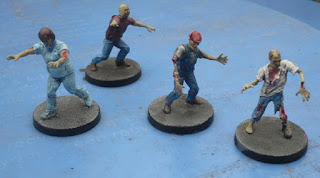 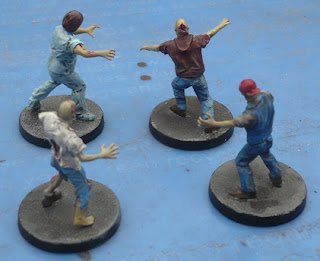 And what a bunch they are.  Warlord Miniatures' again, and I'm beginning to warm to them a little.

It's hard to tell from these photos (or on the table really), but I've attempted my first lady zombie.  This was done by the simple expedience of sticking a head from the female sprue onto one of the male torsos.  It's an interesting head - half the face has been eaten away to reveal the skull, but I don't know if you can see that from the photo. 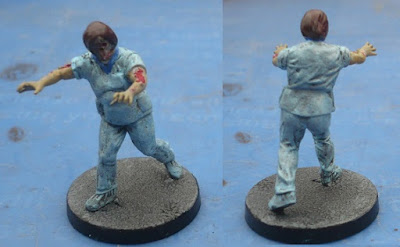 As promised , I thought I'd try blue scrubs rather than last week's green ones.  I prefer the blue as they stand out more on the table: what do you think?  It is. of course the same body.  As with all these zombies, I've perhaps gone OTT on grunging her up. 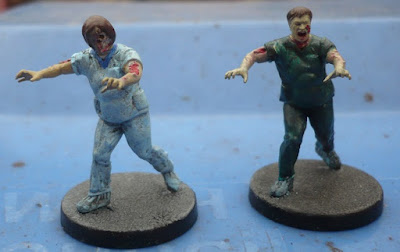 I dare say we'll get quite a few of these as the month comes on, but Hasslefree Miniatures has beaten the rush by announcing 20% off orders for the rest of the month (which won't be shipped until the beginning of November).  They of course do some rather nice zombies and survivors.
at 16:55 10 comments: 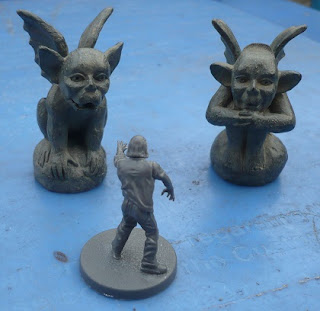 The Hobbit on the Shelf

OK, before I start I'll admit that this is really a) a post about nothing and, b) a very First World Problem.  Be prepared to snort in disgust and think "What is he complaining about?!".  But you should have realised before now that I prefer to blog about trivia rather than the real problems of the world!

A lucky find last week of a couple of Christopher Tolkien's books in a charity shop caused something of a storage crisis.

First some context.  When My Wife and I moved in to live together we faced the problem of how to merge our books.  I'm led to believe that this isn't an uncommon stumbling-block - rather akin to the shock at finding one's wife squeezes the toothpaste tube from the middle(!)  or the fact that I eat my boiled egg from the wrong end.*  The problem was that I like to arrange fiction alphabetically and non-fiction by subject, whereas My Wife prefers the serendipity of the 'as found' approach.**  I won't bother going into the story of how we resolved this (partly because it's so trivial that I can't remember).  Enough to stay that we have a storage problem when it comes to books.  Shelves are double- or triple-staked and have volumes lying flat upon the tops of the standing ones.

*As we all know, literary wars have been fought over such things.
**Paradoxically, She trained as a librarian and I as an archivist.

Occasionally, we try to rationalise things (and sometimes even get rid of books!), and the purchase of the volumes of 'The History of Middle Earth' prompted me to do so with the Tolkiens.  Since the last sort-out, some Tolkien and books about Tolkien have been downstairs on the fiction shelves (between Thynne and Tolstoy obviously) and others have been on my bedside pile (apparently bookshelves in the bedroom spoil 'sleep hygiene', so we compromise by having books piled around instead). 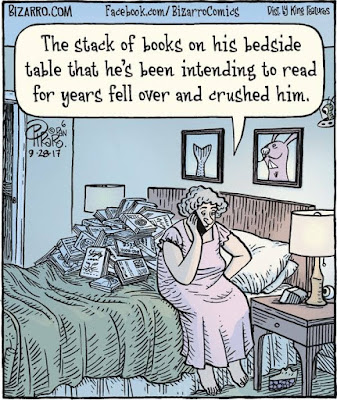 This was not satisfactory!

Tolkien is now consolidated on has his own shelf (except for his writings on Middle English, which are wherever My Love keeps her books on Medieval Lit). 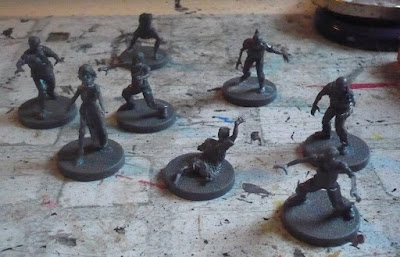 A WIP post for Zombtober. Not for today - because today has been crap - but for yesterday.

So, I spent a little time de-spruing and assembling some Zombs.  I got a half-dozen done before the inevitable meeting between craft knife and index finger.  Fortunately, I had some superglue on hand.

Tomorrow they *might* get primed, which would give me a dozen to play with before the end of Week 3 on Sunday.  What's the betting I only have one complete yet again?

Again, these are Zombs from Warlord Game's Project Z.   I must admit to being somewhat disappointed that the Zombie Horde expansion pack merely duplicates the sprues in the core box.  Am I naive in this?  I'm not terribly fond of the female figures (both Zombs and survivors), who are all a bit tits and ass for my liking - but again, that's probably just me being picky.

If things go to plan, you should see the following posts this week.  But who knows, something exciting might happen to mix everything up!

The main 'Royals in Medals' page for the Earl and Countess of Wessex is here.

As the Wessexes are currently the Queen's go-to couple for foreign engagements, they are picking up several foreign commemoratives that may prove tricky to identify in future - though most will only have permission to wear at functions relating to appropriate nation.

We have already covered one such, which turned out to be either commemorative for enthronement  of Prince Albert of Monaco in  2005, or his July 2011 wedding.

Another appears to have been awarded to both the Earl and Countess last week, when they attended the celebrations of the Sultan of Brunei's Golden Jubilee.

Slow progress this Zomtober, but I've met the criteria of having at least one zombie or survivor to show each Sunday. 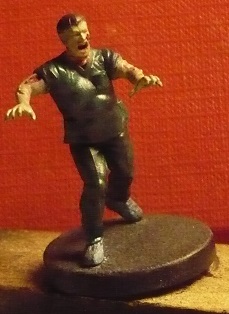 I'm not sure whether it's clear given the poor quality of the photos, but this chap (another of Warlord's) is wearing medical scrubs.  They're not as shiny in real life as the photos, but I still think that the next one I do will be in blue rather than this green. 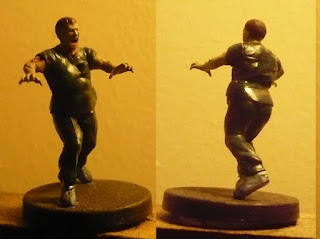 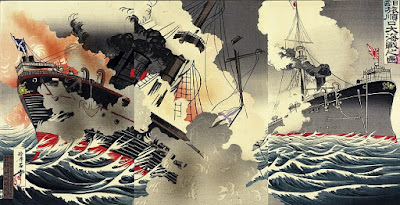 This just received from Long Face Games (AKA David Manley)


Released today from Long Face Games, White Bear, Red Sun is a mini campaign covering the Russo Japanese War from the initial surprise attack on Port Arthur through to Tsushima and beyond.

Also included is a brief history of the naval campaign and the “Broadside and Salvo” fast play pre-dreadnought rules and a complete set of ship data for the rules allowing the campaign to be fought out over a weekend or a few club nights. As well as the main 48 page book in PDF format there are additional files with A4 and A3 versions of the campaign map, sea area control counters and ship record counters for both sides for use with the campaign system.

This seems an excellent bargain, especially as the promised release of Topside Minis Tsushima Set is soon..

Well, the Zomtober rules requiring submissions on Sundays in the month, Week 1 is already on us! 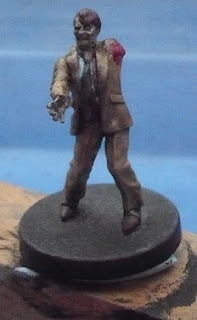 A businessman just back from a inspection tour of a new Asian facility for the cloning of GM battery chickens.  He developed a snuffle on the flight home... 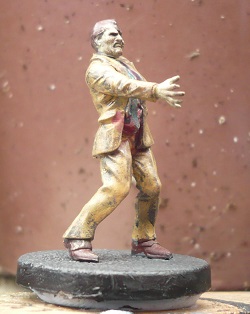 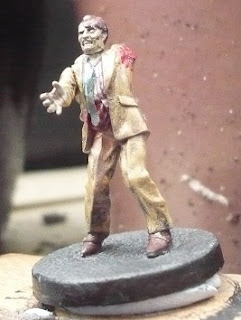 He's one of the Warlord Project Z figures.  His other arm's somewhere between the shed (where I primed him) and my painting table.

My first bash at a Zombie - quick and dirty.