The way it's going, this list of my dead player characters could become a monthly fixture...

As we last let off we were looking forward to Kindroleth's long and stellar career.  After a delve in the Lost Pyramid, he made a single foray into the Barrowmaze and was almost immediately killed by skeletons.

Ginfu is an example of why I need to make these posts.  Until I went to my notes to check how Kindroleth died, I'd forgotten Ginfu completely and had conflated the two characters. 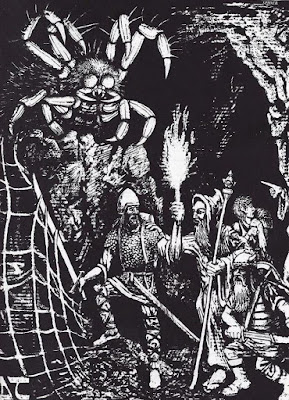 Ginfu managed to make it down the Barrowmaze for two short and disastrous delves.  During the second the party was surprised by Crab Spiders.  We managed to make a fighting retreat out of the room.  Ginfu was to close the door behind them, but was struck down as he did so.  His cry of “Get to the next one!” in their ears the surviving members fled.

Technically, Bronn wasn't a Barrowmaze character but took part in our parallel adventure in the Lost City.  Bronn made two delves and was lucky enough to acquire that thing most beloved of Barbarians (Lvl 1) - a magical sword - by the traditional method of wresting it from the shriveled hands of a desiccated corpse. 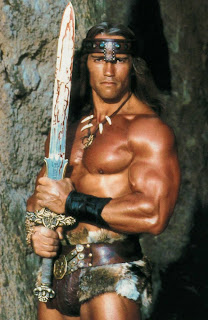 In exploring the Pyramid, the Barrowmaze group are very conscious that some of their members had been killed by Ghouls and still roamed the halls in an undead state.  Most gallingly, one (a Halfling named Saem) was still carrying the party's Bag of Holding.

Bronn met his fate when the show-down between the party and their former colleagues came to a head in an epic battle.

There were six ghouls verses three adventurers and three hirelings.  Moonwhisper the wizard disposed of two ghouls at once with his lightening rod. Bronn and the party's Ranger then stood in the doorway facing off three. Bronn clove (cleaved?) Saem in half with his mighty +1 sword, but both ended up paralysed. Moonwhisper got two in a Web spell, leaving one that attacked and paralysed him. His hireling (the other two had run away) finished it off, but instead of killing the ones in the web, waiting for Moonwhisper to recover and collecting the booty, he decided to carry Moonwhisper off.

So, in addition to whatever's in that room, there are ghouls with the Bag of Holding, two diamonds worth 500gp each, various loose change and a +1 sword.  Plans are being made...

So I have two characters in hand