Well, because nobody expects...

No seriously, my second submission to the APC was a 28mm metal figure from Black Pyramid Gaming - their Prof Stanton Brook.

He's obviously based on the Sydney Paget illustration of Prof Moriarty for the Strand Magazine, and that's why I bought him, but on handling the figure I was immediately put in mind of this chap from my youth.

This is Henry Edward Manning (1808-1892), Cardinal Archbishop of Westminster, and I somewhat perversely decided that I wanted him in miniature.

The expected question was asked - "From your youth?  How old are you Edwin?"  No, I don't remember Manning, but I did spend quite a lot of time reading about him. (1)  So much time that I even considered submitting him as my entry to the Nostalgia bonus round. (2)

1  He was the subject of my Master's degree.
2  But decided that was too self-referential and obscure. 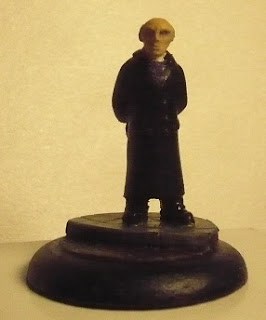 Enough about me.  What about the figure?

Whether the criminal mastermind has decided to disguise himself as Dr Manning, or whether - more shockingly! - His Eminence is himself the Napoleon of Crime will have to be the subject of further investigation.  It is however an odd co-incidence that Manning's death occurred mere months after Moriarty's supposed demise in Switzerland... 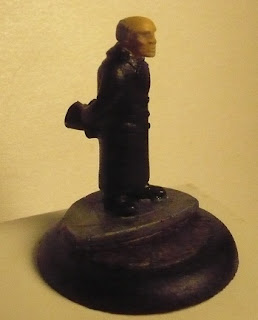 The base. again, is one I won from RayR.  I have tried to catch M's cadaverous pallor and broke the monotony of clerical black with some uncanonically grey gloves.(3)  You mayor may not be able to spot the purple bib.

3 I'm sure you all remember the story about John Henry Newman donning grey trousers in 1845...

I titled the submission to the APC 'Eminent Victorian'.  This is of course a pun on Manning's position as a Prince of the Church, but also a reference to Lytton Strachey iconoclastic book of the same name. (4)  Some of you (5) will immediately think "By gad!  He's going for a full set!".  Yes, I've already done one of Strachey's victims subjects - I only need Florence Nightingale and Thomas Arnold and I'll have a crime-busting quartet the pantheon of Victorian respectability.