As I'm sure most of my readers will know, this week has seen the centenary of the Battle of Jutland.  Much has been written and will be quite easy to find on the net.  Here I'm going to make my own little tribute based on items from my collection. 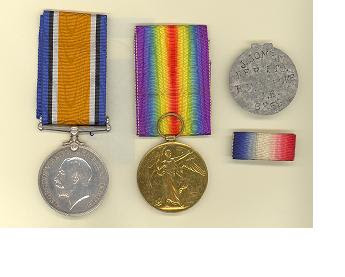 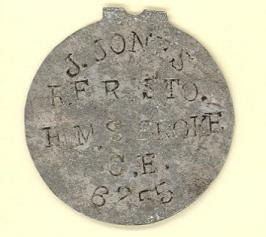 These are two of the First World War medals and id disc of SS.107636 Leading Stoker John Jones, of HMS Broke.  Jones served on Broke at Jutland and was severely wounded during the battle.

Jones' service record shows that he was born on 31 January 1890 in Middlesborough, Yorkshire. On his enlistment he is described as 5 foot 3.8 inches tall with a chest measurement of 36 inches. He had a dark complexion, brown hair and brown eyes. At some stage during his naval career he picked up a scar over his left eye.

The 1891 Census shows John living with his father Samuel and mother Eva at 74 Derwent Street, Linthorpe, Middlesborough. His father was a 'riveter (boilers)' a profession that John began to follow, as his occupation on enlisting is given as 'rivet heater' - but other ancestral voices may have called as his grandfather, also named John Jones, is listed on the 1871 census as a seaman. In the 1901 census, John's father is described as a 'riveter (bridge builder)', but I can find no trace of John himself.

Jones enlisted at the age of 18 as a short service man (five years in the RN to be followed by seven in the Royal Fleet Reserve).   Non-continuous service was established under the Naval Forces Act, 1903, because there was a recognised lack of stokers in the navy due to changes in technology - in 1890 there were 8,900 stokers required, but by 1901 this had become 21,400.   The Act established Class C reservists, who served seven years with the fleet and then five years in the reserve. In Jones' case, as was the case with all stokers, these figures were reversed, presumably to make that branch more attractive.

On enlistment in August 1908 Jones was rated as a Stoker 2nd Class and immediately posted to HMS Nelson, where he remained until January 1909.   Nelson was an armoured cruiser, built in 1876; by 1908 she had become obsolete due to the rapid increase in naval technology in the intervening years and was stationed in Portsmouth as a training ship. She was finally sold off in July 1910.


From Apr 1909 to Sep 1910 Jones served on HMS Cochrane - being promoted to Stoker 1st Class on 12 Sep 1909.  Cochrane was a large Armoured Cruiser (1st Class) built as part of the 1903-04 naval building programme.  She was launched on 20 May 1905, named in honour of  Admiral Lord Cochrane, 10th Earl of Dundonald, and completed in Feb 1907.   During Jones' time in her, she was part of the 2nd Cruiser Squadron. Later she escorted the Royal Yacht Medina on her world tour and during the war served at Jutland, in the West Atlantic and Russian waters. She was wrecked in the Mersey on 14 November 1918.


After serving in Cochrane, Jones joined HMS Hermione, serving in her from Sep 1910 to Aug 1912.  Hermoine was a cruiser of the Astraea Class launched in 1893 and had taken part in the 3rd China War.  When Jones joined her she had just become the depot ship for naval airships, based in Barrow-in-Furness, and he would have witnessed the experiments with HMA No 1 (His Majesty's Airship No 1, AKA 'Mayfly').  HMA.1 was an experiment built as a result of Germany's Zeppelin programme, intended to act as an aerial scout.  Sadly she never flew.  Following static trials, Mayfly was wrecked while being removed from her hanger for her maiden flight.  The experience with this craft and her sisters led the Admiralty to decide in favour of heavier-than-air aircraft.

When the Navy's lighter-than-air project was shelved, Hermione re-joined the Home Fleet (Jones leaving at about the same time).   During the First World War she was the HQ Ship for motor launches and coastal motor boats. She was sold to the Marine Society in 1922 and became TS Warspite. She was scrapped in 1940.


During 1912 Jones spent some months in HMS Ariadne.  Ariadne was a Diadem Class Cruiser, launched on 22 April 1898.  In 1912 she was in reserve as a stokers' training ship (which would explain the short periods Jones served in her). She was brought back into the operational fleet in 1914 and converted into a minelayer in 1917. She was torpedoed and sunk on 26 July 1917 by UC65 off Beachy Head.


From Nov 1912 to Aug 1913 Jones served in HMS Princess Royal, finishing his enlistment in the Royal Navy.  Princess Royal was a Lion Class Battlecruiser - one of 'the Splendid Cats' - launched in May 1911 and completed in Oct 1912. For the first time in this time of constant change, Jones was serving in a state-of-the-art ship.  During the First World War she served with distinction, taking part in the battles of Heligoland Bight, Dogger Bank and Jutland. She was sold for scrapping in 1922.

Jones spent his last week in the RN at HMS Victory II, before being discharged to shore and transferred to the RFR on 10 Aut 1913.  Less than a year later he was called up, reporting to Victory II again on 2 Aug 1914 as the Reserve was mobilised in anticipation of the outbreak of hostilities.

In Dec 1915 Jones was appointed to HMS Broke, a small ship that was soon to make a big name for herself.

Broke was a Faulknor Class flotilla leader.   She had been launched in May, built for the Chilean Navy as the Almirante Lynch-class destroyer Almirante Goñi.  But as war broke out she was bought by the Royal Navy and named for Admiral Sir Philip Bowes Vere Broke - 'Broke of the Shannon' - who had commanded HMS Shannon during her engagement with, and capture of, USS Chesapeake in the War of 1812.

The Battle of Jutland

At the battle of Broke was hit by at least nine shells and seriously damaged in a collision with HMS Sparrowhawk. Forty-seven of Broke's men were killed, twenty-eight of whom were stokers.   Jones was severely wounded.

At about 23,15 on 31 May 1916 the 4th Destroyer Flotilla, of which Broke (captained by Cdr Walter Lingen Allen RN) was the Half Leader (ie, second in command), sighted three approaching ships.  Uncertain of who these ships were, a recognition signal was given, only to be answered by them opening fire at a range of 600 yards. It was  the van of the German High Seas Fleet, the light cruisers, SMS Stuttgart, SMS Hamburg, SMS Rostock and SMS Elbing.  The battleships SMS Westfalen and SMS Nassau also opened fire with their secondary armament.

Despite the opening of fire, confusion remained.  Allen ordered no torpedoes be fired until the ships were positively identified as German. This being done, the leading British ships - Tipperary, Spitfire, Sparrowhawk, Garland, Contest and Broke all fired torpedoes at the German ships before turning away from the incoming fire.   None of the destroyers further behind felt sufficiently confident to attack.

One of the torpedoes hit Elbing, which was also rammed by the battleship Posen as they turned to avoid the attack - Elbing was abandoned and sank around 03.40.  Spitfire collided with Nassau, both being very badly damaged.  The flotilla leader HMS Tipperary was ablaze and sank about 02.00 with the loss of 185 hands from her crew of 197.

The official history of naval operations during the war records that


Broke had taken the Tipperary's place. Commander Allen found that half a dozen boats had got into line astern of him, and ... he was leading them southward, where he judged he should find the enemy again. He was not far wrong. In a few minutes—it was about 11.40—he could see a large ship on his starboard bow heading to cross his course. He challenged. The answer was again a blaze of searchlights and a burst of rapid fire. Commander Allen swung to port to bring his tubes to bear. Lieutenant-Commander S. Hopkins in the Sparrowhawk did the same, and then to his horror he saw that the Broke, instead of steadying her helm, was continuing to swing and coming straight for him. As the Broke turned she had been hit by a salvo which put her out of control. There was no time to avoid a collision, and she crashed into the Sparrowhawk just before the bridge.

The salvo which has hit broke was fired by the battleship Westfalen at a range of 150 yards.  Confusion reigned.  One officer from Sparrowhawk was thrown onto Broke during the collision.  He reported to Allen, who told him to return to Sparrowhawk and prepare to take the crew of Broke on board.  When he did so, he found that his own captain had ordered the evacuation of Sparrowhawk's crew to Broke!  Approximately 20 men from Sparrowhawk transferred to Broke, while fifteen of Broke's crew crossed to Sparrowhawk.  Any question of which vessel was to be abandoned was settled when Contest back-ended Sparrowhawk, removing six feet of her stern.  After the destroyers were disentangled, and following another brief exchange of fire, they limped back to England.

The recommendation for Allen's promotion states that "Broke was very badly damaged and casualties very great, but the morale seems to have been unshaken and the ship was successfully steamed back to port."  Whether it was due to the shelling of Broke or the collisions, Jones' records show that he was dangerously wounded during the battle.

Broke arrived in the Tyne on 3 June, Jones was transferred to Victory II on 9 June, where he remained until April 1917.

The 4th Destroyer Flotilla, having suffered great losses during the battle, was removed from the Grand Fleet and stationed at Devonport.  Broke went on to nation-wide fame as part of the Dover Patrol, taking part in the Second  Battle of Dover Strait in Apr 1917.

Jones was also to join the Dover Patrol, being posted to HMS Attentive, an Adventure Class light cruiser, commissioned in 1905. She was leader of the 6th Destroyer Flotilla.   In August 1917, Jones was posted to his final ship, HMS Amphitrite

Amphitrite (nicknamed 'am and tripe) was a Diadem Class cruiser, converted to a minelayer in 1917 and attached to the Nore Command. She collided with and sank the destroyer HMS Nessus in foggy weather in the North Sea on September 8th 1918 and was sold for scrap in 1920.

Jones was discharge from service on 5 June 1921.  I have no information on his later life.