Gor, it's been a long time since the last Dr Who Wednesday!  To look at DrWWeds #10 you have to go back to March!

I'd love, if as a result of that, this was a long post full of lots of things I've been doing in the last two months, but it isn't.  Who do I blame for this?  THE BLOODY DERLICKS!!!  More on that later.


Spotted on the Web

I haven't even posted about Warlord's new Dr Who figures that were put on display at Salute*.  The consensus is that they're rather good - though the  naysayers have been mumbling about the scale - a rather 'heroic' 28mm apparently.  As I say, I haven't seen them in the flesh, and in any case will reserve judgement until pricing info comes around.


* I'd hoped to see them in the flesh on the Warlord stall at Dicini - but they hadn't brought them along due to space constraints. 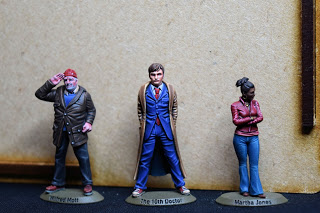 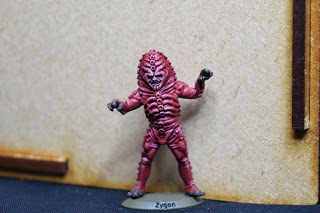 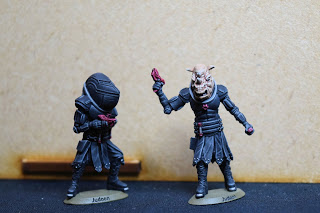 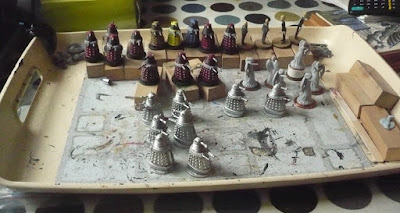 My painting queue has been dominated by Dr Who for a long time.  Who do I blame for this?  THE BLOODY DERLICKS!!!

About the last time I posted a DrWWeds, I thought I had finally cracked the secret of Dalek Balls*.  "Just carry on like this, Edwin,.  Do an hour or so each evening, and you'll soon crack it".  And so in my hubris, I got carried away.  Now there are about two dozen of the buggers in various states of non-completion TAUNTING ME!

* I know people say the secret is to use a straw, but I just haven't tried that method.

Of course, they aren't the only culprits.  I hate to say how long those Ood and Silence have been a whisper from being finished.  Let's just say it's been a while.*  Over on FaceBook the Official Doctor Who people have a Monster of the Month, posting all sorts of clips, snips photos and fan art.  Lots of good reference material.  May was Ood Month**.  Did you know that Oods had spotty necks?  No, neither did I.  I'm not painting bloody spots on bloody Ood I assure you!

* I put them aside to concentrate on the AHPC Five.
** No news as yet on who will be June monster - betting is that it won't b e giant moth creatures.