Last night my butterfly approach to wargaming took another turn.

Inspired by a series of posts Bob Cordery has made - particularly this one - on his "simple pre-Dreadnought wargaming rules" I popped over to his free downloads page and helped myself.

Naval wargaming is notorious for the paperwork involved - what with ship's records cards, chits and Stuff.  But when Mr Cordery says these rules are simple, he means SIMPLE.  The entirety printed out on a sheet of A4 (double-sided if you want the diagrams explaining arc-of-fire) and only took a read-through to understand them.  For those who want to fight the ACW or the Battle of Lissa there's also a variant for the 1860s,

Within a five minutes, I'd broken out a hex board and some tokens and was playing one of the scenarios he'd tested for COW.

After running through it twice, I decided that using round counters was unhelpful when playing with ships (apparently it matters which way you put the pointy end).

So I was forced to undertake the audacious chore of making little ships...

I defeated the object of  having A4 rules by printing out the arc-of-fire templates and drafting ship's record sheets - but then my board wasn't large enough to add damage markers.

So what do I think?  These are lovely rules and gave me a good night's entertainment (which is what it's all about).  I am sure that the simplicity is deceptive, and some quite sophisticated actions could be played out with them,  Nevertheless, they would serve as a great intro to naval wargaming for someone who is averse to record keeping.  As that aversion wore off, you could complicate matters by adding house-rules, simultaneous movement, damage tables - the whole kaboodle!

I'm certainly going to carry on playing them.  I'm never going to go as far as painting teeny-tiny ships, but I'll upgrade my snapped-up coffee stirrers (I've already downloaded some ACW and WWI counters from the Wargames Vault).

This has also served to reminded me that I intended to try some sole games of Blood, Bilges and Iron Balls.  See what I mean about butterflying! 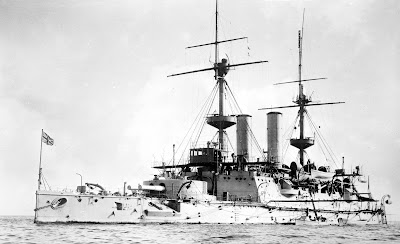