It's been far too long since I posted here.  Fortunately, I'm well and, as those of you who know me on Facebook or follow the Diplomatist Books blog know, still active.

Rather than go into a long "where have I been and what have I been up to..." I'm going to make that easiest of posts: the Kickstarter Watch.

The fine chaps at Antediluvian Miniatures have come up with the brilliant idea of casting some miniatures of demons found in Medieval MSS (and wall paintings, etc). 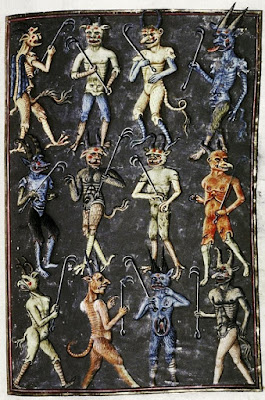 Some of you may remember the post where I asked why we always play with cultists based on the early C20th American imagination when Great Britain and Europe generally has thrown up some particicularly fine examples.* Antediluvian are obviously of the same mind.


*The answer is Lovecraft, obviously.  That post cost me a few followers from  among the fundemental wing of Christianity - they wouldn't like this one either. 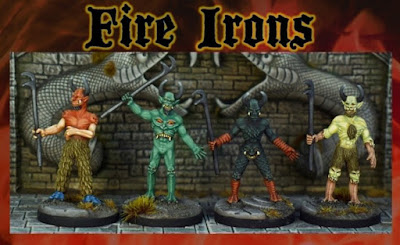 As can be seen from the pictures above, there's lots of scope here.  The basic goal was to produce three sets of four demons, but that's already been surpassed and we now see variants with hand-gonnes and various stretch-goals (Black Terrence, anyone?), with more promised.

Although I might, for purely selfish reasons, prefer is Antediluvian concentrated on their Lost World ranges, I think that it's refreshing to see some fantasy figures that haven't sprung out of the pages of the AD&D Monster Manual or the Cthulhu Mythos for a change.

How would one use them?  Well, it wouldn't be the first time the Doctor has met up with Daemons or ventured into The Satan Pit...  They'd give a Summoner a run for his money in Frostgrave....  And it would be interesting to see what the American Investigators (or even those Darn Pesky Kids) would make of meeting some proper Olde Worlde villains for a change...
at 21:25