So I did a test of the mash-up I'd made of DBSA and the TSM rules (to understand, look back to the two previous posts) last night.  I do like elements of the Portable Naval Wargame as well.

They worked quite well with the simple scenario I played through (two Red cruisers attempting to disable or sink a Blue battleship).  They even threw up some classic narrative turns: the battleship sank one cruiser which in its last moments get off a salvo which damaged it so much it was unable to hit the second cruiser with either primary or secondary armament (ie, I rolled really bady twice!).  The second cruiser then sank the battleship. 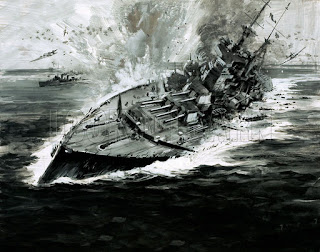 The next test will involve more ships and ship types, but I'm already going ahead and investing in some prettier ships.  I also need to find more sea room!

In yesterday's comments, Roy and I discussed how to tweek things for solo play.  I'm not the sort of analytical person who can replay the same scenario with deliberately different strategies, so I need something to avoid both sides making the same moves.

I go for dice rolls (everything is done with one or two d6), but card draws could be used if you're that way inclined.  As you can see from last night's result, rolling on gunnery can already leads to unexpected results.

I might go for nominated  targets, but that might get unnecessarily complicated as the number of ships increases.  Another possibility is rolling for mines at the end of the movement phase.


I decided against using DBSA's flag officer characteristics and weather modifiers as I'm using TSM's Movement Points rather than DSBA's NIPs.  Once I'm more versed in such things I might go that way, but for now I want to keep it simple.  I did consider rolling for movement, but couldn't really justify that to myself as representing naval operations.

I'm thinking aloud here.  I'm not going to report back on the minutiae of each development, but If anyone has any feedback or suggestions, I'd be glad to hear them.
at 13:12