As I'm sure most readers of this blog will know, the Sixth Annual Analogue Hobbies Painting Challenge drew to a busy close some 18 hours ago.  Between us 75 contributing participants submitted 75.450 points-worth of figures.*  Apparently, there were some forty-odd submissions in the last 24 hours alone.  Three of them were mine, and this week I'll be posting them here for those of you who lost them in the blizzard!


One of the traditions of the challenge is that we pay an entry fee by painting and sending a figure representing the year's theme to Curt, the Challenge organiser.*  This year's theme being Risk takers and Gamblers, I thought the following wise guy was appropriate.

*He in turn, generously donates $5.00 to the SPCA for each figure received. 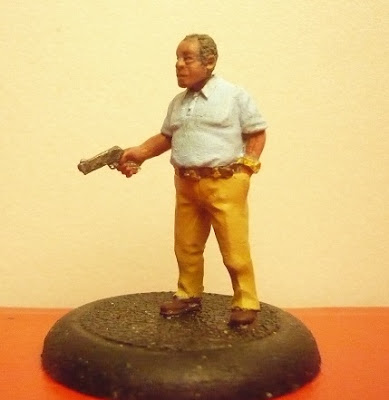 He's BigT, a 28mm resin figure by Pigeon Guard Games I won last April.  Given that the figure was intended for Curt I really shouldn't have invested him with a back-story, but I couldn't help myself.

I saw him as a Miami Beach bail bondsman who gambled that those small-time criminals he paid bail for would turn up to court.*  If not, well, he became the risk-taker who had to hunt them down.  That was until Z-Day, of course, when his talents found a new avenue...  Curt seemed to approve!