Something New: The Spy Hack

Yesterday I tried something new: literally.

A couple of weeks ago our usual GM sent a message out that he was looking to play-test rules and scenarios that a friend and he had been putting together.  These were inspired by the 1980s Avalon Hill James Bond 007 roleplaying game, but aimed to be streamlined in the style of The Black Hack, to:


Accordingly, I and two other rookie agents received our mission briefing: to attend a party hosted by a dodgy billionaire on his luxury yacht in Monte Carlo; to make contact with our inside man (who has failed to make his scheduled reports and may need to be extracted); and to exfiltrate with any intel gathered. 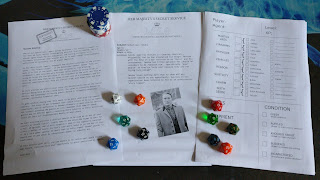 Despite my concerns that the genre wasn't really my thing, I had a very enjoyable time.

Our mission was a success despite partially blowing our cover (we'd been advised to keep a low profile and lay the groud for further missions), leaving a pile of bodies behind and tearing off in a couple of Zodiacs half-way through the party.  We've alreay been put on notice that this may affect our chances in the next mission: to infiltrate another party being given by the same host, this time in Las Vegas. 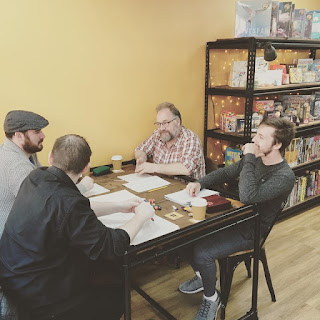 The system met all the goals - it was intutative and very easy, and there was no looking up of rules involved.  Before long we didn't need to be told what characteristic check we needed to roll (a simple d20 check, occasionaly with Advantage or Disadvantage).  A few needs for further developments were noted (such as how noticable a gun-fight in the next room might be).

The only drawback was a lack of background fluff: how much did a cup of coffee cost in 1970s Monte Carlo?  Does anyone know of a good 1960s/70s sourcebook that might help?

There seems to be good scope for character and story development.  Character-building was quick and we started out with some back-story ("quirks"), but we were encouraged to build on that in-game: one of our PCs has now established himself as an expert on 1970s haute couture (particularly Spanish fashion-houses for some reason!) by dint of role-play. 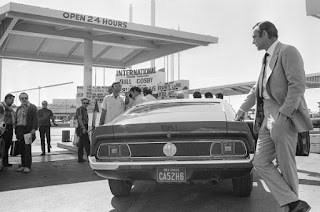