OK, no stuff here about why today should be a Bank Holiday.  Nothing about why we should recapture pride in England from the extremists.  Instead, let's look at the True Meaning of St George's Day - dragons!

In the past my 'Only in Norfolk' posts have prompted a lot of interest.  Here's something for the fans of that kind of thing (you're welcome Robert!). 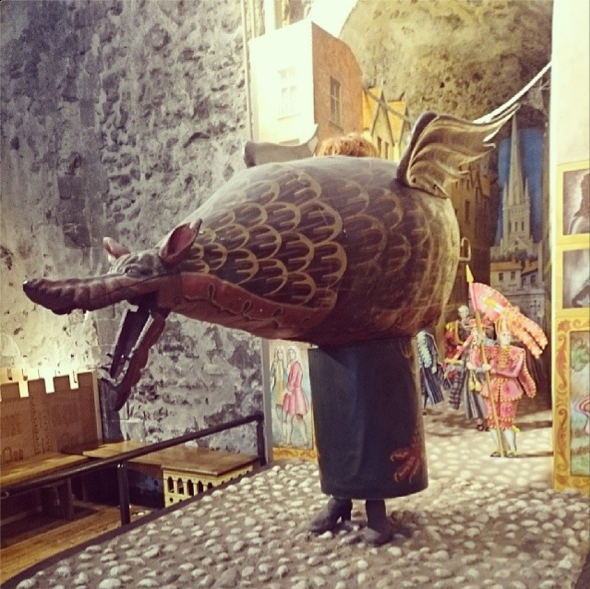 This Snap the Dragon in the Norwich Castle Museum,  Snap is an example of the tradition of snapdragons (and snap-horses* - the best-known is the Padstow 'Obby 'Oss).

In common with many English cities, Norwich had a Guild of St George, founded as a religious guild in the fourteenth-century to  to honour St. George and keep his feast day, to pray for its members past and present and to offer alms to the poor and needy within the Guild. 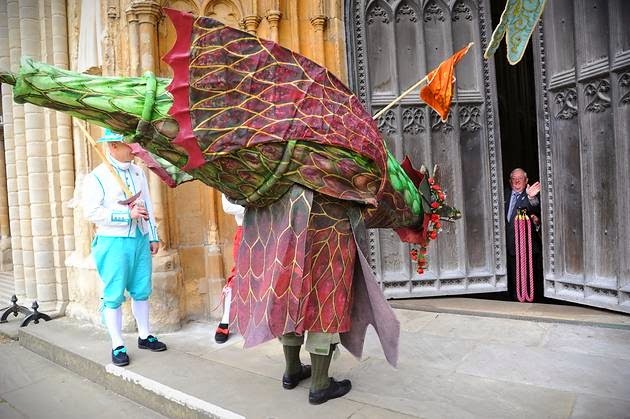 On St George's Day, the guild held a grand parade.  George and Margaret, the maiden he rescued, were represented, but the undoubted star was Snap, rushing around, taunting the crowds with wings flapping and smoke shooting from his mouth.  The earliest reference to the dragon comes from the minutes of the Guild Assembly of 1408 at which it was agreed 'to furnish priests with copes, and the George shall go in procession and make a conflict with the Dragon, and keep his estate both days'.

The guild became one of the most powerful and wealthy in the city and developed close ties to the city government.  By the end of the sixteenth-century the Mayor was the ex-officio head of the guild (now a livery company) and City Aldermen and officials formed its council.  Guild Day merged with the swearing-in of the city's new mayor.  The Company had rooms in the Norwich Guildhall.

The Reformation stripped the guild of its religious aspects, but its civic links ensured its survival.  . Although St George and Margaret no longer featured in the procession, Snap remained** and the procession evolved into a grand civic occasion.   In the 1720s reformers attacked the legality of the Company's actions, the outcome of which was the surrender of all their goods and possessions to the Corporation in 1731. 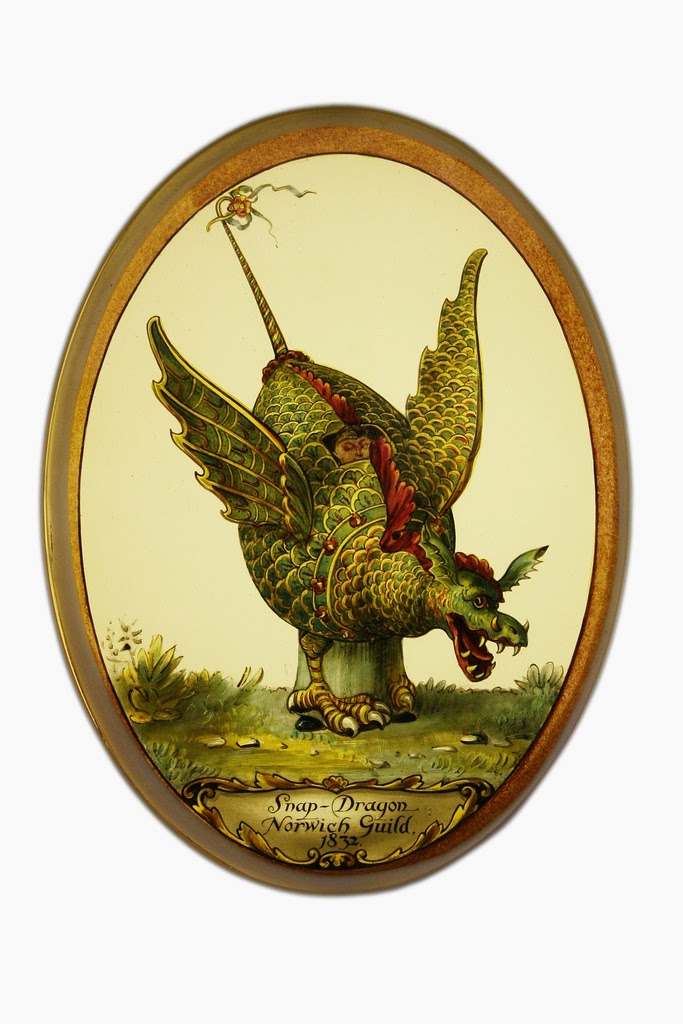 An antiquarian has left a description of an eighteenth-century parade:

The outsides of the houses were hung with tapestries and pictures, particularly the new Mayor's house. From here the dignitaries then paraded on horseback to the house of the retiring Mayor where a substantial breakfast of pasties, roast beef, boiled legs of mutton and wine were provided. The procession then set out for the cathedral.

The way was cleared by six Whifflers and two Dick Fools accompanied by the dragon. Mackerell says 'The Dragon, carried by a Man in the body of it, gave great diversion to the common People: they always seemed very much to fear it when it was near them, but always looked upon it with pleasure when it was a little distance from them'. The Whifflers were dressed in a distinctive costume of scarlet satin breeches, white satin jerkin and a hat decorated with a cockade of feathers and ibbons. They carried swords which they brandished and tossed in the air. Helping the Whifflers were the Dick Fools, who wore painted canvas coats with red and yellow cloth caps adorned with fox or cats' tails and small bells.

Throughout the country such activities were increasingly seen as part of a corrupt system of local government and swept away by the reforming Municipal Corporations Act of 1835.  Snap and his ilk refused to go quietly, though.  In Norwich the tradition was maintained by the Pockthorpe Guild, founded in 1772***.  With the 'election' of a Mock Major and mock officials, the Pockthorpe ceremonies were a a rowdier take on the official ones.  The focus was firmly on the dragon, who would snap at hats and caps in his jaws, holding them to ransom, accompanied by the chant 'Snap, Snap, steal a boy's cap, give him a penny and he'll give it back'.

In 1997 a Morris group, the Norwich Whifflers revived Snap, and as you can see he is once more part of the Lord Mayors' celebration.

But the fun doesn't end there!  Since 2008 Norwich has held an annual week-long Dragon Festival of arts and events.

Later this year, a sculpture trail around the city will feature decorated dragons****.

* Writing this reminds me that whippets are also known as 'snap dogs'.  As the flies have been out and bothering Zeppo, I see why.
**  From the 1553 minutes,'there shall be neither George nor Margaret; but for pastime, the Dragon to come and shew himself as in other years.'
*** Then an hamlet, Pockthorpe is now a suburb of the City.
****Previous years have seen similar elephants and gorillas.