Sundays in the Shire #1: First Thoughts 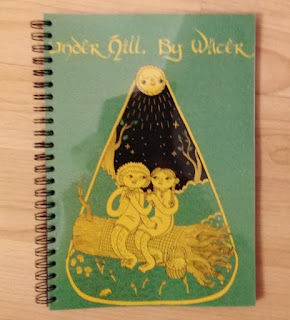 Last month Josh McCrowell published 'Under Hill, By Water' an RPG that had been gestating for a a couple of years on his bliog Rise Up Comus (which I would highly recomend for a variety of good stuff).  It's a game about being a Hobbit* living a quiet, pastoral life: "Adventure! No, thank you!".

*I use the term advisedly - 'Under Hill...' doesn't use that word of course.  'Hobbits' are the IP of the Tolkein Estate.  Still it is clear that McCrowell is talking about, and in homage to, Tolkien's creation.  These aren't the 'Halflings' that have grown out RPG culture: McCrowell explicited says "a lot of fat from dragons and/or dungeons has been trimmed off".

As an aside to this footnote, I would point to McCrowell's excellent blog post in which he considers how one would RPG The Hobbit if the Middle-Earth IP had solely consided of that book.  It gives a nice feel of his style.

As the description says, "this is an OSR(ish) game that’s about living in the cozy under-hill homes of the halflings" going back to 'the source material of Tolkien and the eclectic, rustic, anachronistic little British gentry that were the center of his stories".  The adventure promised is on the level of delaing with awkward aunts and ornery goats, rather than defeating dragons.

Well, for a Hobbit-botherer like me, this sounds like fun, and luckily I know a few like-minded people.  Accordingly, last week we sat down for the first of what I hope will be many Sundays in the Shire.

The first step in playing is to create a Hobbit village and populate it with both PCs and NPCs.  The books suggests that this is done with all players together, in order to build relationships and family ties in at this early stage - in effect to have a Session Zero.  We didn't quite do that.  Dave and his co-GM Scarlett (aged 6) created the village beforehand.  Fortunately, Dave recorded the process and has put it up as the first episode of his new podcast My Kids Will Kill You.  You can listened to this 40min process here, which I'd advise as it gives an excellent overview.*

*And if like me, you like to shout at your podcasts, rest assured that Prof Aldridge does now know that peat-cutters cut peat (and why).

Although there are some basic attributes, character-generation - like village-creation- is mainly based on a series of random tables.  Perhaps most important of these for a Hobbit is the family name, which potentially makes PCs and/or NPCs relatives (though it didn't in our case) and reference to an Ancestral Home.  Each PC begins play with a dream (the fulfilment of which is a means of acquiring XP).

In order to give a taste, here are our three PC's:-

As can be seen, the process of character-generation provided a lot of back-story and some good plot-hooks.  In addition, for each season a Current Event, a Worrisome Thing and a Village Event are rolled.  We ended up with late, heavy snows; the fact that an elderly aunt in a neighbouring village isn't answering her letters (this Thing was allocated to Jemmy's character); and that a petition against wearing large hats to public events was going around.
There are mechanisms for skill checks, combat, and particlurly Hobbit-like activities such as Feasting (restores HP), Singing (gives inspiration) and Party-Giving (increases prestige).  I won't discuss them now as, frankly, we hardly used any in this first session.
So how did the play go?
It was fun!  Gentle fun. 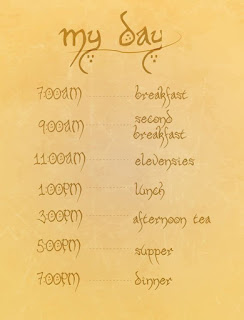 We quickly established that our activities needed to revolve around meals.  Luckily there was several inns in the village and our cook friend was renowned for making the best muffins in the South March.  The only drawback was that pesky pie recipe!
And, although we did make some progress on the other Dreams, I think it's fair to say that the Pie-Quest took centre stage.  Harvey's rival turned out to be a wretched fellow called Tylo Splistening.  Activities including souring his courtship with the fearsome Walda*, who was behind the hat petition**; interaction with the local fencibles***; and orgainising a violent snowball fight between rival fraternal societies; the last as a diversion for a spot of light breaking-and-entering.
*Walda is the subject of the romantic interest of a surprising number of NPCs.  It is yet to be established why.  She may prove to be an heiress.
**Jemmy took against the petition as likely to upset his many elderly female reatives.  Jemmy is the PC I played.  Although Lobelia Sackville-Baggins is in the mix, my concept of his aunts owes a lot to P G Wodehouse.
***Who, quite properly, wear very fancy large hats. 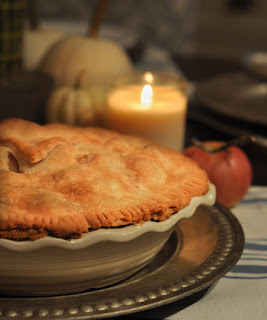 Email ThisBlogThis!Share to TwitterShare to FacebookShare to Pinterest
Labels: Index Card RPG, J R R Tolkien, My Kids Will Kill You, Sundays in the Shire, Under Hill By Water