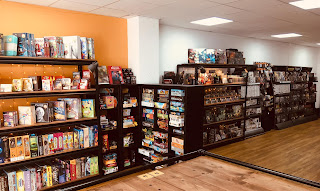 After a summer during which the only gaming I've been doing has been the solo campaign that I've been posting about, in October I got back into visiting my FLGS, The Games Table.  Indeed (because I'm now avoiding pubs), I'm now going a little more often that I did before.

Norwich being a small place, it turned out that there was some social overlap between my work colleagues and my gaming chums.

I've had a couple of sessions in which I've been playing board/card games with work colleagues.  We've taken advantage of Board Game Night at The Games Table, with opening until 11pm.  Nothing exciting to report I suppose.

We tried a couple of new things...

First up was Endangered Orphans of Condyle Cove.  Phew!  We just couldn't get our heads around this one.  The rules/instructions just didn't make sense to us (probably made worse because an expansion had been inserted into the store's copy).  After 10 minutes of fafffing around we gave up and moved on.  Frankly, I'm surprised that it's got such a high rating on Board Game Geek.

The second new game was forgetable, and I promptly forgot it's name.  It was basically a version of "draw what's on the card" charades.  The "twist" being just how obscure some of the phases were.  Is was daft fun to end the evening, but I wouldn't want to play too often.  The production values were quite low, for one thing.

Much more fun was had with old favourites:  Battle Sheep, Exploding Kittens, Unstable Unicorns (with the Dragons Expansion pack) and Catan.  Catan is, of course, brilliant; that and Unicorns are my favourites of what we've played.

If we carry on going as a group (which remains to be seen), we're going to make an effort to try more new stuff and more 'big box' games.


I've posted separately about the games-test of the Not-Bond game The Spy Hack that I went to at the end of October.  Read more about it here.


Our on-going open table Old School Essentials (B/X) campaign is still in full-swing.  Our default is to go down the Barrowmaze, but if our regular GM can't make it (or if so many players turn up that we have to split into two games!) another GM jumps in and we take our characters on a little trek to explore the Lost City Under a Pyramid (I'm not sure of the title of the module).  So, Barrowmaze twice and Pyramid once.  Mortality remains high, particularly for my characters (I gave up counting when my fifteenth died).  Tomorrow I'll be rolling a new one.   I have a backlog of notes on our Barrowmaze delves: I don't know whether to continue my old practice of posting write-ups. 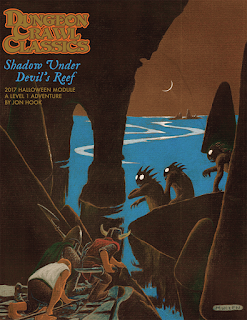 And as a bonus, last week there was a Dungeon Crawl Classic session, in which we played the Shadow Under Devil's Reef module.  This was released in 2017 as a Halloween special, and I think that it's fair to say that there was more than one unsubtle nod to the Lovecraft Mythos.
at 22:56

Email ThisBlogThis!Share to TwitterShare to FacebookShare to Pinterest
Labels: Board Games, RPGs, The Games Table