For obvious reasons Face-to-Face gaming has been on hold, but as regular readers will know I've been lucky enough to have been getting in to playing RPGs on-line.  These are generally aranged through Discord and played using Google Hangouts, Zoom or Roll20 (or a combo of these).  If anyone wants an invitation to join any of the Discord chanels, let me know.

Our Black Hack game continues.  Because of the Open Table Dave runs, we jump around various areas of his Melcher's Vale setting from game-to-game.  We've therefore been exploring dungeons under the ruined temple, delving into the sewers and had a martial arts tournament (with added intrigue between bouts).

A relatively new development has been that introduction of faction rules.  It's early days yet as none of us have earned enough points to progress very far in any of the factions.  They all seem to have major drawbacks though!

It turns out that the Patron my Mage has attached himself to is quite probably a vampire and, having received her Kiss, he might have been Renfield'ed.  At the end of each session I've having to pass a CON Check to avoid loosing HP.

On the other hand he has now made contact with the Eunuchs' Guild, so that's a positive...

Our modern-setting (c.2003) of CoC run by Andy Goodman (of the Expedition to the Grizzley Peaks podcast) continues, and the plot thickens.  Having said that, in our last session we lost said plot and went off on a complete tangent.  One of our party  attempted to cast a spell, went permanently insane and ended up summoning an Old One, Tsathoggua.  Decapitations were involved.  We closed the session just as the cops arrived... 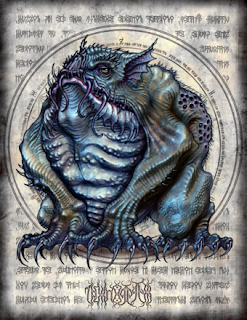 Meantime, Episode 2 (which we played back in Feb and in which we go a bit mad) has hit the airways.  Reminder, I'm playing Charlie Hogan, the cameraman.

This was a one-off run by Pete (of the Dragons Are Real podcast).  It was my introduction to the system, which is very simple and easy to pick-up.  It's Pete's go-to system for a number of genres, but we were playing a low-fantasy style.

The plot rotated around a raid that had been done on a pie shop (Mrs Miggins' Pie Shop of course).

The obvious culprit was the owner of a rival establishment, but that seemed too simple.  My character was convinced that the rival was a small cog in a larger plot who had taken advantage of the removal of magical wards for his own purposes.  We therefore spent some time talking to to other establishments and testing wards (my chap walked into them until he was knocked out).  At least we established that it was a lie that all the wards were down.

In the end it turned out that the obvious solution was the right one.   The pieman had stolen Mrs Miggins pies in order to reverse-engineer the recipie in a lab he'd set up in a cabin in the woods.

Anyway, the game was a blast and ICRPG works very well.
at 16:56