Over at the Royal Order of Sartorial Splendor blog there's an interesting post on the royal attendees of the Pope Francis' inaugural mass. If anyone is interested in dress code, and in particular the privilège du blanc, then I'd certainly recommend popping over there. Follow the links she posts, there are some nice pics of popes from John XXIII onwards with various royals.

I'm just going to nick a picture of the Duke and Duchess of Gloucester.  Since it was announced the they were to represent the Queen at the mass, my 'Royals in Medals' profile of them has been held the top spot in the visitor stats, so see this as my cheap attempt to grab more hits!  It's not shown in this photo, but the poor duchess had to sit next to Ken Clarke (which might explain why she's looking a little deafened). 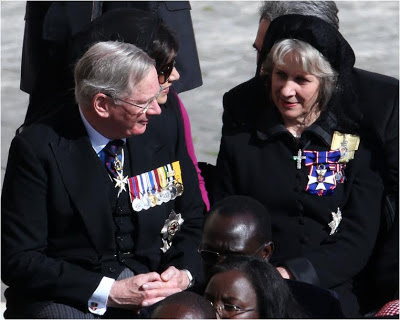 On the 'Royals in Medals' front there's nothing new to add here - the orders and medals are explained in my previous post.  It's interesting to see the duchess choosing the Royal Family Order, GCVO, Diamond Jubilee Medal (on bow) combo - why the last as opposed to anything else?  It looks a little cluttered; but there's no real significance in any of this.

I've just noticed that in my profile post I'd said the duke has the Nepal Coronation medal, but haven't mentioned in the duchess' medals though she is clearly wearing it in the photo.

One other small point of no interest.  When did you last see a UK diplomat (other than the late lamented Rex Hunt) in Levee Dress?  Well, here's one http://www.flickr.com/photos/ukinholysee/8579000797/.  Perhaps when the Ambassador's blog is updated he'll explain why he hasn't mounted up his jubilee medal (or perhaps he's been a naughty boy and didn't get one).

By the way, in her blog post OSS says one of the wisest things I've ever read about ceremonial


I have a personal theory on all issues of protocol, by the way: just when you think you've got the "rules" down, you will find an example to contradict you. Therefore, by the transitive property of meh, you shouldn't worry about it too much.