Regular readers may realise that my regular RPG group's system of choice is Old School Essentials (formerly B/X Essentials) by Necrotic Gnome.  OSE is a retro-clone and restatement of the 1981 Basic/Expert rules for D&D.  People who know better than I do have said that it's the best expression of B/X.

Our group were involved in the play-testing of various new bits of the rules-set (readers of my Butcher's Bill posts will appreciate I've had the chance to try out several of the Advanced Classes!) for an edition that went to Kickstarter back in April to great sucess: it funded withing two hours, and finally was over 1000% subscribed.  So this is more than just an unboxing review:  I'm fairly familiar with the contents, and am enthusiastic in my recommendation of them! 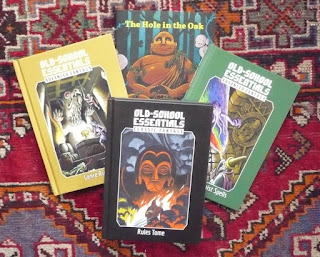 Well fulfilment is underway on schedule and my rewards arrived today.  In fact they would have arrived on Wednesday: instead I received the Red Card of Frustration.  The OSE group on Facebook has been full of tantalising photos from across the world while I've been twiddling my thumbs!


Up to now OSE has been published in module form: a series of softback books of 40-60 pages.   This is quite handy as it allows people to buy which bits they need, but not the others.  So for example, as we've been playing over the last year and a half, as a rule only the GM has have the booklets covering monster stats and allocation of treasures but there might have been three copies of the core rules and the character classes volumes at the table.  Another advantage is that the intention is to bring out additional modules covering additional genre rules or other specialisations (word on the street is that Post-Apoc is being planned).

In putting together the new issue, Gavin Norman has continued with this modular system (but now in hardback with new-and-better illustrations).  These are available in a Black Box version, with the five core volumes. 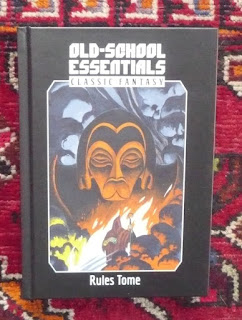 Having said all that, I chose to go for the Rules Tome option, in which these five core volumes are presented in one 296pp hardback volume.  As you'll see from the photos below, the volume has very high production values and great artwork.  From the cover options I chose the Peter Mullen varient, an image I love (and is expanded on the new GM's screen). 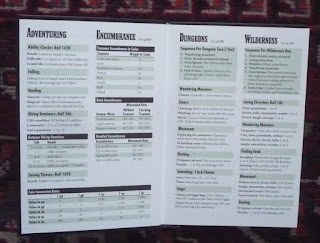 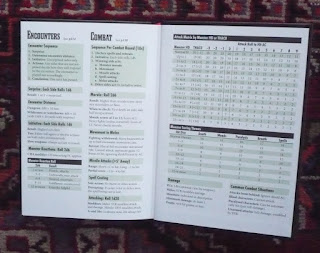 The front- and end-papers of all the volumes have quick reference table relevant to the contents.  The Rules Tome has a couple of ribbon markers, a nice touch. 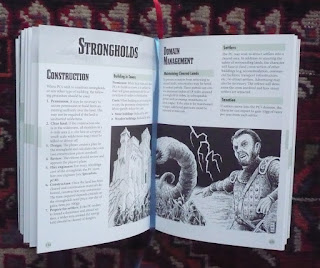 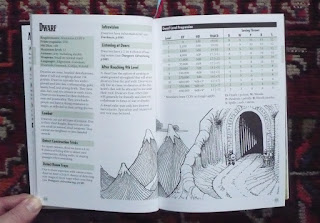 Layout is a module of clarity and well thought-out artwork.  Where possible, Gavin has worked hard to have all the relevant info on a single double-spread - as can be seen with the decriptions of character classes. 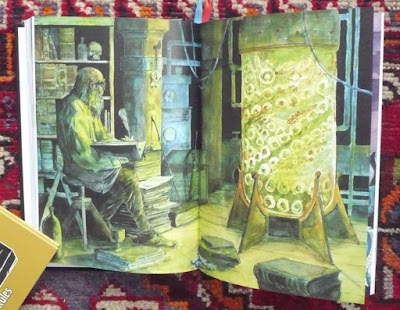 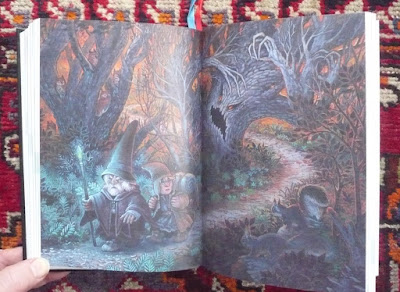 And the art-work can speak for itself...  Over two-dozen artists are represented in the Rules Tome. 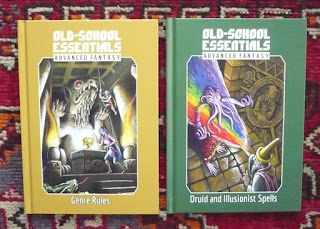 There were two modules in the Kickstarter aditional to the Core Set or Rules Tome:  Advance Fantasy Genre Rules and a list of Druid and Illusionist Spells.  The major part of the Advance Rules is that addition of another 15 character clases and the option of character races (because this is B/X of course, and the default is race-as-class).  Druid and Illusionist are two of the new classes, so they needed a spell list.   I've played from both these volumes in various drafts, and they work well.

The small volumes have the same production values as the Tome (without the special colour spreads) and will work well on the table - we all know the problem of POD or other volumes that lose pages after very little use. 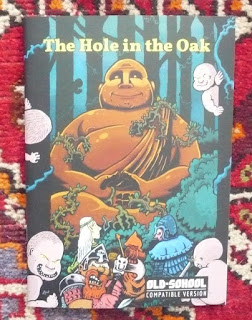 Finally, one of the stretch goals for the Kickstarter was the inclusing of an introductionary adventure: The Hole In the Oak.  This was described as "a classic (and quirky!) old-school adventure for 1st level characters, set in the Mythic Underworld that lies beyond the hole in an old oak tree. This odd realm will be mapped by the mycologically inclined Karl Stjernberg and illustrated by the phantasmagoric James West". 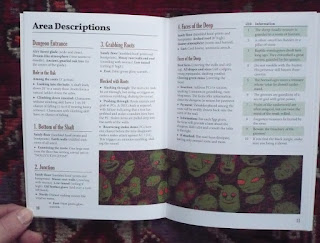 Unlike the other volumes in the Kickstarter, this is a softback (staple bound of 32 pages), but the same care has gone into the layout and choice of illustrations.

I'll be immersing myself in this module over the next week, as in an excess of enthusiasm I've offered to GM the module.  My first experience of GM-ing!  I'm going to do a dry run on some close friends and then break it out for the more discerning RPG group.

Necrotic Gnome's next project is a Kickstarter in 2020 for the production of a Campaign Book for the weird and wonderful Dolmonwood setting.  I've played in that setting, and I hope to be be able to sign up for that one too!
at 23:01