Barrowmaze #13: More of the Butcher's Bill

I don't have the heart to write up the notes of all the sessions since I last reported on Barrowmaze back in July (and in any case some of my notes are a bit sketchy).  However, since the casualty rate with my characters is now so legendary that it's forming part of a charity fundraising special, I think I will update on them.

The fates of my first seven characters (including the legendary B'Loxi) can be read here and the next here.

When I last reported this gnome and his fierce friend Dachs the badger were still alive and on their seventh delve into Barrowmaze.

The journey out for their ninth was an eventful one.  After being attacked by a crocodile in the swamp, the party was surprised by ghasts, which left Decimus down and unconscious.  Dachs bravely stood over his friend's body and fought fiercely.  However, he himself was taken down and killed as the party retreated taking the wounded Decimus with them.

For months afterwards there were stories of badgers roaming the moors on moonlit nights having their revenge on the undead.

The grief-stricken Decimus didn't out-live his friend for very long.  On the next delve the party explored a flooded barrow.  Decimus promptly put on his Ring of Walking on Water and was swanning around when his coleagues triggered a pit-trap.  Water rushed into the hole, Decimus surfing the wave only to be impaled on the spikes below.

Grandinfel made two delves.  The highlight was his first, when he recovered a part of Elven boots (of silent movement).  On the second he was killed by a giant scorpion.  I don't recall what happened to the boots. 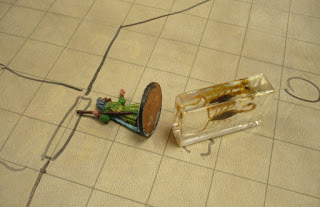 D'zen fell victim to a pit-trap on (I think) his third delve.

Falnarkin (who's class I can't remember) was killed in a rather epic battle with fire beetles in which our wizard famously levitated and dropped Molotov Cocktails onto them.

Edit:  I am reminded that Falnarkin was a Half-Elf. 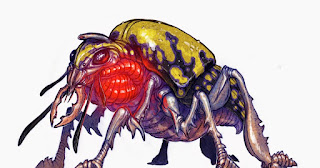 Silgar took part in a fight where the party was trapped in a burning room by a group of necromancers, who then sent in their zombies.  One escape route was into a room full of giant flies, the other required a wall breaking down.  Sadly Silnar didn't live long enough to find out which choice was made.