I couldn't help sharing this... 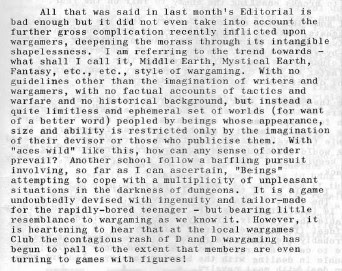 It's from May 1977 editorial of Donald Featherstone's Wargamer's Newsletter (which rather marvelously is online at http://fourcats.co.uk).

It actually ties in with some discussions I've been having recently which touched on the influence of wargaming on early RPGs.  I was pointing to the debt that Gygaz et al owed to Tony Bath.  It's interesting to read Featherstone pontificate* on the subject.

*I suspect that this is an 'Editorial Voice' and not necessarily reflective of his own view.

I particularly like the last sentance.  To paraphrase: 'this D&D stuff is rubbish, but at least it's brining youths to proper wargaming'.  It's a sentiment I hear today about 5e.

But there's also a rather sensible letter in the following issue  (which is every editor's hope in writing a provoking editorial).

I was interested to see your, and Mr. Griffith's remarks on the direction in which wargames are going. I hope however that rather than looking back we can go forward to new and better developments, rather than indulge in a rather pointless debate about whether Fantasy games are "wargames" or not.

All this is doing is defining wargaming, when we could be pursuing studies of strategy and tactics rather thant Just as we are all free to devise our own rules, based on personal interpretation of the facts, so I hope this hobby will never become ravaged by a debate as to whether a particular activity belongs to it or not.

Rather than criticise Fantasy and/or Boardgames, which after all must entertain their respective adherents, unless they are masoehits!, we should strive to improve "standard" wargaiming so as to lure these heretics baek to the true faith!

A. Harman of Walsall.


Actually, there's quite a lot of interesting stuff in the magazines even if you fall on the D&D side of the table.  The Minifigs' advert for pig-faced orcs alone... And it is very well put-together, given that it was the age of typewriters and rotorary duplications.  I see many zines today that can't match it's production qualities.
at 12:46