For various reasons I won't go into now, November was a complete write-off hobby-wise.  I've just checked and it was one of only two months since August 2012 when I haven't even made a single blog post.  But I'm not here to beat myself up about it...

With the prep underway for the Analogue Hobbies Painting Challenge 'Ate, hopefully this will change, but I thought I'd start the ball rolling with the old stalwart - 'What I've Bought Recently'.  As regular readers will know, I don't spend much money on hobbies, so it's not a large haul.

With the relative successes of Zomtober and 'Go Sober!' I thought I'd treat myself to some of the money the latter saved me so went out and got me a survivor's gang. 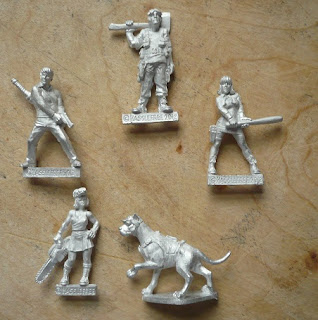 These, of course, are Hasslefree Miniatures post-apoc version of Mystery Inc - hopefully should be fun to paint.

While in this self-congratulatory mood I also treated myself to David Manley's White Bear, Red Sun - his mini campaign covering the Russo-Japanese War, which I blogged about when they were published back in early October. 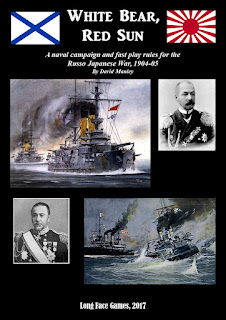 Since then, Topside Minis have released their Tsushima range and David announced yesterday that his supplement covering the naval side of the Spanish American War is now available.  Both are high on my list for my next splurge of retail therapy. 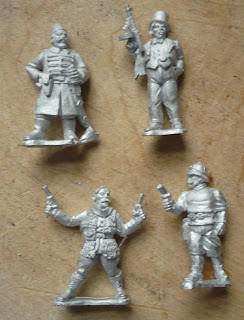 For some years now Bob Murch at Pulp Figures has been producing a figure to raise money for Movember (his giving page is still open).  For the first time these have been easily available in the UK , with North Star carrying masses of Bob's ranges, so I took the opportunity to pick up previous years' figures (this year's didn't appeal to me).  As you can see, these are really great figures, full of character.


A really lucky find was this semi-flat Doughboy that I picked up very cheaply in a charity shop.

Yesterday, I went for a mooch around some of the 'antique' shops in town (as a antidote to Christmas shopping).  I was lucky enough to find this:- 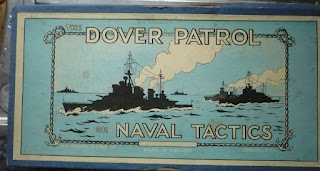 For those interested, the write-up on BoardGame Geek can be seen here.  A few months ago I'd seen a copy of L'Attaque, the land equivalent, and had been half kicking myself for not picking one up.