Before I start, last Sunday was the first bonus round ('Reconnaissance') for the Challenge.  I didn't submit anything, but plenty of people did - and it's splendid work.  Go over there, have a look and vote for your favorites.

My submission took the form of some dungeon delvers and critters, earning me 40 points. 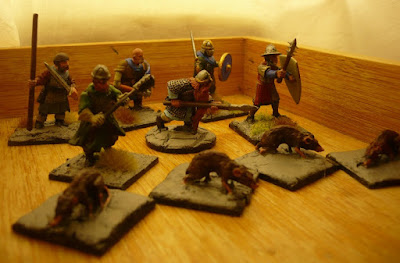 I've been asked some questions about this, so a little context. As regular readers will know, I started attending a game when a new FLGS opened last summer. It is decidedly Old School (we use Necrotic Gnomes' B/X Essentials and are delving into a mega-dungeon called the Barrowmaze). It's a bit of a meat-grinder - six months in and I'm on my fourth character!


There are no fancy classes or multi-classes; a trap is more likely to be a pit with spikes in the bottom than a portal to another plane; and you're much more likely to meet rats that flying eyeball monsters.  That being so, the guy with the ten-foot pole is probably the most usefully kitted-out! 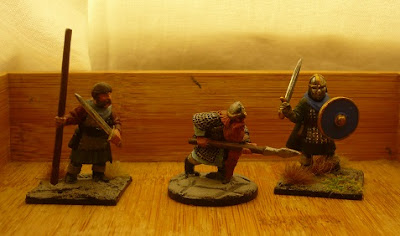 We normally meet once a fortnight as an open table. As a consequence, we don't know who or how many will turn up, but it's been a roaring success. This week, for the first time we had too many (16) people and had to split off into two tables. Fortunately, we're lucky enough to have a second DM who always brings his kit and a module just in case. 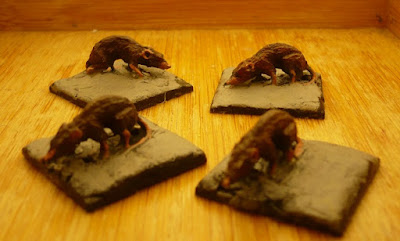 All the figures are 28mm,  The humans are plastics (a mix of manufactures and bits from odd sprues, including Mantic, Northstar's Oathmark and a Frostgrave Cultist); the dwarf is a metal Oathmark champion; and the giant rats some second-hand lead I picked up last year.


As I didn't post the finished results of the minis I was painting just before the Challenge began, here they all are together.