One of the unforseen results of the house move was going without broadband for almost a fortnight.  This put a cramp into my participation with the various on-line campaigns that I'd been taking part in and other, multiplying oportunities for on-line play.

First a look at the on-going games without me...

Just as Bolton the Mage had made contact with the Eunuchs' Guild of Mudharbour he had to drop out of the game.

In fact he's been doing some in-depth research into various arcane mysteries at Bo Lee Wang's monkey cabaret and over-indulging on dolphin burgers.

Episode 3: The Spider Clinic, which we played on 7 Mar has now hit the airwaves.*  Enjoy!

Two sessions went ahead without me (fortunately, Charlie, my character, has tended to fade into the background all along).  Andy has given me access to the unedited recordings of these sessions. 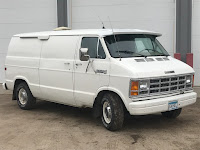 Our TV crew ('The Supernatural Files') rescued their co-presenter from the hospital where she'd summoned an Elder God, were reunited with their van and  finally made their way back to the abandoned farmhouse where we assume all this began.  And then things started getting weird.  In Andy's immortal words (ones you do not want to hear a CoC Keeper say), "well, that escalated quickly!"

We estimate that there's probably only one session left.

Andy is strict in keeping his sessions to a two-hour max.  These are then edited down to a 70-90 minute episode on the podcast (which is why you don't hear any dice-rolling or consulation of madness tables).


*In fact, Andy has been very busy.  His podcast is running six or seven different actual play campaigns at the moment with various Call of Cthulhu, Traveller and Tales from the Loop going on.

This is GM'd by Dave Aldrige, who also runs The Black Hack sessions.  Although he's still running TBH, he wanted something with more of a campaign feel.

Dave has written a hack under the OGL of Swords and Wizardry Continual Light with an implied setting of DnD's Dark Sun (with the serial numbers filed-off).  There's a draft for play-test here if you're interested.  Our campaign is very much Dark Sun.

I missed the first session, but I have written up the second here.

I've never played in the Dark Sun setting, so can't say how true Dave is being to it, but suffice to say that I had a blast in this post-apocalyptic fantasy world with a hint of Barsoom.  As a friend of the blog said commenting on Dave's description on his podcast, this is definitely 'planet of the bastards'. 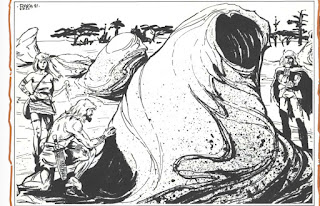 We play using a combo of a Zoom meeting and Dave's discord channel.  This latter allowed for the in-game sharing of artwork - which I always find useful - and maps.  There's also some out-of-game roleplay there, with one of our players writing up the session in the form of her character's (a Thri-keen trader-druid) journal.  This I find really helpful in giving some colour.  Actual roleplay is one of my weaknesses (as you know, my write-ups tend to be 'this happened, we did this, then that happened...') and being able to read someone elses RP interpretation helps me focus my own approach. 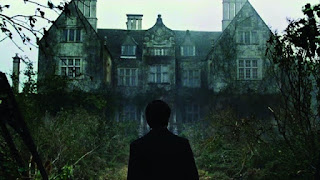 Jason Connerley offered a one-off, settling on a 'spooky theme' (the alternative was 'cowboys in space').

It turned out to be an odd one!  Four of us played ourselves, returning from a RPG Con on a dark and stormy night.  Our hire-car broke down by a washed-out bridge.  Fortunately, there was a large house nearby on a hill...

Unsurprisingly, there was a strange butler and a mad scientist.


Some may remember that I ran a solo dungeon-crawl last year.  This was done using Old School Essentials and a rather complicated system I'd botched together from a number of sources.  As a result it was a little unwieldy and although I enjoyed it, it collapsed under its own weight.  I therefore looked out for a system that can be run out-of-the box for a quick session, and invested in Four Against Darkness.

4AD is pretty basic, but I thought I'd give it a go.  It's ideal for those times you just want to sit down and roll dice for 45mins or an hour with no prep.  There's a good review here.

Time will tell whether there is much scope for repeat play in the system.  If that proves a problem, there are supplements and modules available for the cost of a couple of pints.  It may even prove an interesting exercise to expand the d6 Encounter and Treasure Tables to d66 ones.  I may write up sessions using the Heybrook setting I created for the previous campaign - it will prove the practice I need in creating a narrative out of dice rolls and hack-and-slash.