Dark Sun #2: The One Where We Fought Elves, With a Dragon as Background

Our party has been hired by Sidar Kurlak, head of one of the merchant houses of Urik, to recover his daughter Aspis, who had apparently been kidnapped by a group of escaping slaves.  These elves were tracked across the Alluvian Tablelands, where we eventually found that they had been captured by the dwarves of Kled.  After some horse-trading, the daughter and elves were handed over to our group.

It then turned out that this was not as simple a rescue operation as it had appeared.  Aspis demanded that she and the elves be released and that we go to an elven stronghold where she would be able to garner support for an uprising that would free all the slaves in Urik.

We decided to have no truck with this, paralysed her and bundled her onto the back of our beast of burden.

We started encamped outside Kled.  Fearing that elves may attempt to rescue Aspis, we had decided to rest before what might be a forced march back to Urik.  We also decided that it would be safer (and hopefully quicker) not to return the way we had come, but to head eastward until we hit the road running north to Urik.

While still at the camp, the party was rejoined by Frayne, the Urik Templar, who had remained behind healing-up following the encounter with giant hornets, and by Uanyra a Halfling, who he had met on the way, along with her slave. 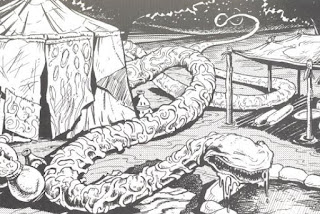 A long night-time trek through the sandy wastes proved largely uneventful.  However, even by the light of the twin moons it was clear almost at once that we were being stalked by some large, flying creature.  As daylight broke we made camp and the beast – it turned out to be a silk-wyrm - made its attack.  It first struck the water-carrying kank, giving the camp the chance to awaken.  Gre’kkt’s psionic ability to banish the wyrm gave us the chance to take up positions to despatch it as soon as it reappeared.  Various body-parts were harvested and Gre’kkt recovered a clutch of six eggs.

Two hours after breaking camp, we finally found the Urik road and were from then able to make better time, only pausing to exchange news with a trading caravan heading south.  Before the day was over, we were in sight of Urik.

Entering the cultivated areas around Urik was a relief.  We took time to pause and refresh ourselves following our long journey through the sandy wastes.   However, as soon as the city came into sight we encountered a mass of fleeing citizens and saw that it was under attack from a huge dragon.


Both Fribb and Frayne were subject to some form of psionic backwash, each having visions relating to the dragon – Fribb seeing it being surrounded by the spirits of the dead, and Frayne seeing himself plunging a metal spear through its hide.  Our destination was on the far side of the city from the dragon’s attack, so we decided to avoid it and press on in order to relieve ourselves of our burden and collect our reward.

Fribb (who is one of Sirdar Kurlak’s household slaves) lead us straight to his mansion and an immediate audience.  However, we saw that Kurlak wasn’t immune to the quite reasonable air of panic in the city: an evacuation of the mansion was underway.  Kurlak was delighted to see his daughter again, but in no mood to deal with us.  He promised that we would receive our reward on his return to the city, but his immediate concern was to get out of Urik as soon as possible.  He conceded that if the party wished to join him, his household could do with the extra bodyguards on the route up-country to his summer lodgings.  This earned a rebuke from Frayne, who saw the abandonment of Urik as an act of disloyalty to the Sorcerer-King.  Kurlak wasn’t inclined to argue, and the rest of the party recognised that joining his caravan was their best chance of getting paid.  Rajal, Frayne’s retainer made the decision that his master (who was fairly rattled on seeing the dragon attacking his city) wasn’t going to do what was good for him, and knocked him out.

It soon proved that Kurlak was indeed in need of extra bodyguards.  As we pressed through the throng in the marketplace, we were surrounded by a group of eight elves.  The caravan guards were of no assistance whatsoever during the skirmish, during which Aspis used her arcane powers against us.  With Fribb and Geo put to Sleep, things were touch-and-go, and Kurlak was seriously injured (as which point Aspis seemed to realise that assisting the elves had been a step too far).  Gre’kkt and Garrok rallied around the fallen merchant (and his wallet), and Unayra was able to make some telling hits from her hiding-place.  Frayne resumed consciousness and was able to use his authority as a Templer of the Sorcerer-King to get assistance from on-lookers.  However, his loyal and useful retainer Rajal was killed, as was Gre'kkt's nephew and apprentice, Kreekit.

The elves defeated and the dragon having moved on, the caravan returned to Kurlak’s mansion (Aspis in a much subdued frame of mind).  Kurlak was too seriously injured to address the party’s questions, but promised answers (and hopefully payment) soon...