A TPK in Blackmoor

In addition to the regular Wednesday night sessions Dave is running of his Blackmoor-based Old School Essentials game, he experimenting with running on-demand sessions at the weekend timed to be friendly to North American players.

In this first session only Cody and I turned up, so we each played two characters and a retainer/hireling each.  As this is kind of a side adventure, I decided to leave Pluteus and Homund at home (from other OSE experience, I also know it's handy to have a stable of characters building up XP!) and took C'Loxi the Elf and Danton the Thief.  I acquired a dwarf hireling who I called Merc (as a mis-remembering of my old Barrowmaze hireling Merg).

As with the 'main' sessions we started in the Halfling village of Booh, where we we hired by the Caveward family to find their missing daughter, who had been snatched by a mysterious flying creature and carried off into the Greenwood.  Things started well:  our Elf had knowlege of the Greenwood and our thief was able to shinny-up trees to see the lay of the land.  Soon we met a knight who promised to assist us in our noble quest if we could best him in combat. 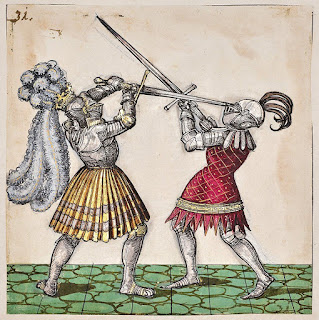 This is where things turned against us.  Unfortunately, our oaf of a fighter was unfamiliar with the concept of subdual attacks and mortally wounded brave Sir Swain with two massive blows.  Nevertheless, that earned him a sword and barded warhorse... 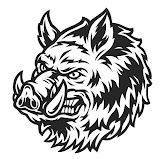 As we contined on our steathly way to examing a ruined tower, we disturbed a family of six fully-grown boars.  Between them they quickly managed to kill four of the party (including the C'Loxi who had decided that it wasn't worth using his Sleep spell on them).  The remaining two party members - Danton the thief and Merc the now-promoted retainer - got up the nearest tree.  But trees are no match for angry hogs!  As it collapsed, and as grasping vines reached from the tower, Danton made a suicidal leap into the melee, killing a boar before being messily gored.

Merc was pulled into the tower, only to meet a harpy.  He managed to avoid being enchanted and (literally) escape her clutches.  Once outside the tower he bumped into his third cousin, twice removed* who was busy looting his colleagues' corpses.  His relief was short-lived as Phany the dwarf fell under the harpy's spell and killed him.
*Hastily rolled up!
The orginal party dead, Phany returned to Booh with what loot he could carry and an odd tale of that cousin who his mother had always said would come to no good.
One of the most enjoyable sessions I've had in a long time!
And there's room at Dave's table!
at 19:25