Blackmoor (OSE): No 2 - Shrooms and Boom-Sticks

It’s a while since I wrote-up one of our games, but our latest delve into the Under-Booh has spread into three sessions – with different combos of PCs – so some continuity was required (and XP offered to do so!).

Based in the Hafling village of Booh, the players (in various combinations) have been employed by the Tunnel Fighters Guild (run by the Stoneward family) to map out the ancient Dwarven excavations that are rumoured to extend over 8 miles under the Peaks of Booh (!!!) to the town of Blackmoor. 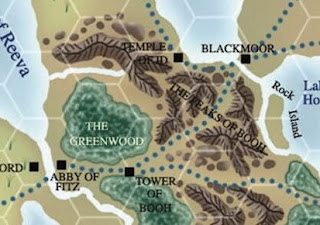 On our previous excursion we ran into another Halfling faction – the Springbournes – who made us a much better offer for mapping (and have their own healing pool).  After some initial hesitation, we decided to throw our lot in with them.

We were lucky in as much as a rumour-monger was visiting Booh.  They sold us the tale about the Under-Booh that if we went as far East as we could and then North whenever we could we would come to an ancient Dwarven clockwork fortress, now over-run by goblins.  In it, we would find the Battle Throne – a weapon of mass destruction.

Scutter and Eric were hired as retainers.  Holmund agreed to continue in Pluteus’ employ.  Juss brough his trusty mule, Barney.

We entered the Under-Booh through the Springbourne’s secret entrance and Club House.  Travel was again slow.  After two hours we reached a junction, from which a SW passage would in theory join with our previously explored areas.  As we were being paid for each 1,000ft of new mapping, we decided to join up the two areas. 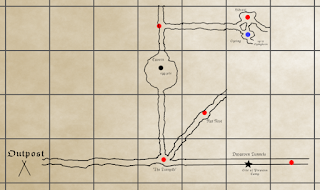 It was a fortuitous choice.  We soon came to a chamber, lit by an all-prevailing glow from floating phosphorescent spores.  In the centre of the cavern was a group of four robed humanoids.  As we approached, we were shocked to realise that they had no eyes, but emanated mycelia from their overwise empty sockets.  Pluteus recognised that they represented no harm and were fellow mushroom-cultists.

The Head Acolyte (“The Dude”, Pluteus explained, “and they’re his Ring”), welcomed us and explained that this cavern was one of the sites within the Under-Booh where The Six Magic Mushrooms grew.  For each of them a Rite of Recognition could be performed.  Each of The Six could be mastered to give deep insight and other powers. A master of all Six could perform amazing feats!

There were only three of The Six in fruit: Purple Stinkers, Yellow Noses and Green Gashes.  Uttering a prayer to the All-Seeing One, Pluteus immediately sought to commune with his fellow-believers and chose to partake of all three Fungal Sacraments.

On nibbling a Purple Stinker he entered an altered state and became part of the mycelial network!  Sixteen spores left his body and began orbiting the room.  Protected by the Dude and the other acolytes, he was able to shepherd these back into his body.  He had Mastered the Purple.

The second rite was that of the Green Gash.  As the acolytes’ chant rose and feel, Pluteus was transformed into a creature of the ‘Shroom - a mole.   Emboldened by these successes, Eric the torchbearer took the Sacrament and transformed into a moth (luckily, due to the phosphorescence he hadn’t a torch lit).  Pluteus and Eric had each Mastered the Green!

The final and most dangerous Rite of Recognition was that for the Yellow Noses.  Pluteus and the Dude both warned that this risked instant death.  It was decided that only Pluteus should attempt this Rite.  Fortified by long communion with The ‘Shroom, he survived and became a Master of the Yellow and adept at its use in poisons.  The Dude admitted that none of his Ring had Mastered the Yellow.  Pluteus, expounded unto them and offered up one of his shrooms: admid much rejoicing, one of the Circle partook of the Rite and survived.

The party left the cavern with The Dude’s blessing and the promise that shrooms fruited every seven days.  During the hour that it took for Pluteus and Eric to recover from the effects of the Green Gash the rest of the party had established that SE of this cavern was previously-explored ground, as expected.

The rest of the day was spent travelling East along the northernmost tunnel.

During the night, Scruffy was on watch when he heard voices, which he recognised as goblins.  After waking his companions, he went forward to parley, but was attacked.  Holmund immediately cast Sleep, knocking out all six goblins, who were quickly dispatched.  A search of the bodies showed that they were unusually well-equipped.  Not only were they carrying 1,000gps and gems worth over half that, but Scruffy recognised that one of them was armed with ancient Dwarven tech – a boom-stick (or Hackbut, as he termed it).

We decided to extend our stay in camp, so Holmund could rest further and regain his always-useful spell.

The journey continued East “as far as we could”, then - as the rumour directed – we turned North.

Unfortunately, as we neared the end of our day’s travel, a moment’s distraction proved disastrous as Scruffy triggered a trap.  He, Scutter, Pluteus and Sir Robert were swept up in a net.  This is where our cunning plan of dowsing our lights and being led by the dwarf almost proved our undoing.  None of the rest of our party could make anything out as a party of four goblins, accompanied by two giant centipedes, came to see what they’d caught.

As those within the net attempted to cut themselves out, Juss and Eric desperately tried to find a lantern and tinderbox in the kit stowed on the mule.  Holmund peered into the darkness, hoping to spot something he could cast his spell on.  The discharge of a Boom-Stick wasn’t sufficient to give him a target.

After much fumbling (and tumbling from those coming out of the net), Eric managed a spark.  Holmund again cast Sleep to great effect.  The goblins’ bodies yielded yet more jewellery, but more importantly another Hackbut.  It was clear that despite our luck these wandering goblins weren’t going to be push-overs.

We camped.  An odd cat was spotted during the night.

Travel continued in a northerly direction.

Scruffy and Scutter in the lead turned a corner and ran into a group of seven giant ants.  Before any of us knew what was happening, the two of them we down and dying.  A short, bloody battle ensued.