Some of you may remember that last October I took part in the virtual Miskatonic Repository Con 2020 celebrating the Miskatonic Repository, the online collection of user-made content for Call of Cthulhu supported by Chaosium, the CoC publishers.  Details of the MR and several hundred products (mainly scenarios) can be found on the DriveThruRPG here.
Although I was able to listen to some of the panel discussions, due to some scheduling problems I only participated in one of the games that were on offer that weekend.  This was a play-test of William Adcock's 'Without Warning' (to be honest, that chance of playing in one of Bill's games with him as Keeper was what brought me to the con in the first place).
Well, the published version of the scenario is now available through DriveThruRPG.com.  I would recommend it - I had fun playing it and reading later drafts.

The setting is the Canadian Arctic in 1958, where something odd had happened to the crew of a remote radar station...

Bill makes no secret that the inspiration for this was Howard Hawkes' 1951 classic 'The Thing from Another World'.  For me, that is recommendation in itself.

OK, to steal a format from the incomparable Reviews from R'lyeh... 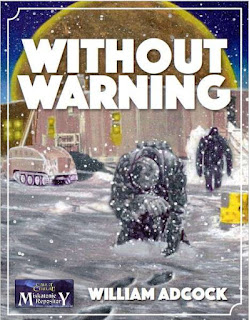 Elevator Pitch: The Arctic is deadly, but sometimes it's worse than that...

Plot Hook:  November, 1957. An isolated DEW-line radar station in the Canadian Arctic has radioed in a medical emergency. A relief flight carrying a medic is dispatched, but as a winter storm closes in, the crew of the Hula Honey discovers something far worse than seals and seabirds roaming the Arctic ice.

Production Values: Clean and readable, well-laid out (by Danial Carroll), atmospheric illustrations (by Jonathan Myers), PDF background layer can be turned off for easy printing.

I enjoyed taking part in the play-test and reading the final text (finding out what we'd missed in-game!) and would recommend it for an afternoon or evening's play.

It's bottle adventure suitable for one-shots or convention play, which is a draw-back, though of course there no reason why this might not just be the beginning for any surviving Investigators...