WH Hodgson, The Casebook of Carnacki: The Ghost Finder

I was disappointed by this.  Mainly because a friend recommended Hodgson last month knowing that I am a fan of MR James.  I already had Carnecki on my shelf, so put it on the pile to read when I'd finished James' Complete Ghost Stories.
Frankly, I just found these stories tedious.  The corny and repetative framing device (Carnacki summons three friends, barely talks to them over supper, tells them his tale and then throws them out) can be excused by the fact that they were originally separately published as magazine stories.  But I found the situations the 'Ghost Finder' found himself in unengaging.  And there's too much use of deus ex machina - solutions to problems hinge on Carnacki using his trusty Electric Pentangle or reciting the last stanza of the Rite of <insert foreign-sounding name here>.
I may be being a little harsh.  Perhaps I was spoilt by just having read the James stories.
But then... 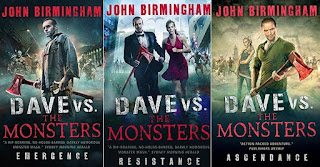 John Birmingham, the Dave Vs the Monsters Trilogy (Emergence, Resistance and Ascendance)
...I went completely low-brow.
These books about an oil-rig worker who becomes an acidental hero with super-powers after the world is invaded by demons doesn't pretend to be anything is they're not (though I wonder if there was an aspiration to a movie deal): competent nonsense.

Jonathan Stroud, Lockwood & Co: The Screaming Staircase
The first in a series of urban fantasy books aimed at Young Adults (and like most of the best of YA fiction, perfectly serviceable of Older Adults), this deals with a Great Britain which has been suffering from a 50-year-long 'Problem' of ghost hauntings, which has resulted in the establishiment of a number of agencies of ghost hunters.  The twist is that the talents to see the ghost fade with adolescence, so that the agences are staffed by teenagers and pre-teens.
Very nicely done, with an interested plot and some nice characters.  It might seem odd to compare a contemporary YA book with a 'Classic' such as Carnacki, but it is so much better than the latter.
I understand that an adaptation is in development for Netflix.
Currently Reading

Julian Whitehead, Rebellion in the Reign of Charles II
Oddly enough, it's the non-fiction that's provided the most enjoyable read this month.
It's taking me time to read this well-written study of intellegence gasthering during the Restoration.  The main reason is that it's a book I've been reading from the stock of Diplomatist Books - and I keep selling it!  (I've sold out twice since starting reading it).
at 14:42