A Couple of Podcasts on the Apollo Programme 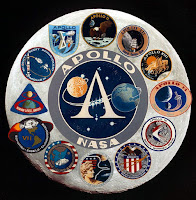 As I posted the other day, I've decided that this March my reading should be themed around Mars.  This was because of the various missions arriving at the planet in Feb/Mar 2021.  I'll post about that reading in my usual end-of-month summary.

But it's 2021 and even I don't just get my info from the printed page.  So, I've spent some time on digital resources and looking for podcasts.  I want to flag a couple - I won't link to them, as you'll want to find them in your favorite podcast-supplier-thing.

The first is Planetary Radio: Space Exploration, Astronomy and Science, a weekly show put out by the (American) Planetary Society.  But that doesn't just cover Mars of course.

Several episodes first broadcast in 2019 (which, of course, was the 50th anniversary of the landing on the moon) have been grouped together as a sub-podcast, A Political History of Apollo.  These five episodes (ranging from about 50mins to about 90mins) make very interesting listening, and are the reason for this post.  As the title suggests they take a very different approach to what the presenter terms the 'usual flags and footsteps' story.  They cover why the programme was set up in the first place, what the contemporary views of it were (even at its peak, under 50% of Americans supported the expenditure), why it was cancelled and where that left NASA.  There is also an excellent episode on the Soviet Space programme which completely revises what I thought I knew of it.

And if I'm plugging Apollo podcasts, I must mention a BBC World Service production 13 Minutes to the Moon.  The first season (also originally broadcast for the 50th anniversary) covers Apollo 11 and the build-up to it.  The second season (from 2020) focused on the Apollo 13 crisis. Both rely heavilly on NASA's oral history programme, but also include new interviews and first-hand accounts.