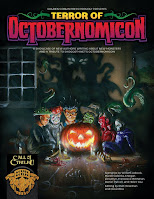 Terror of the Octobernomicon by Golden Goblin Press

The other day I reviewed William Adcock's Call of Cthulhu scenario 'Without Warning'.  Hard on that comes news of a new piece by him.  Regardless of this link though, I think I'd probably flag this Kickstarter from Golden Goblin Press.

On offer is a book containing six Call of Cthulhu scenarions from young and up-coming authors - two Americans, three Brits and a Pole (the KS page includes video interviews with each of them, which is a nice touch).  It's intended to be a showcase for new talent.  The settings are varied - one in Roman Arabia, one in the Old West, and four in the 1920s Golden Age (one each in Lovecraft County, a cruise on the Nile, Cornwall and Vienna).  Each sounds interesting.

All in all, I think I'd probably be interested in backing this.  But then we come to the old problem of shipping.  Without a UK or EU distributor, shipping across the Atlantic doubles the cost for a hard copy.  That itself isn't Golden Goblin's fault (lord knows we all suffered since Trump's ultimatum to the  International Postage Union!) but the decsion does cut them off from a large market.  The lack of a European distributor is even more surprising given that in one of the interviews the point is made that the UK, Poland and Germany have thriving Call of Cthulhu communitites.

Sadly, it's not just the Kickstarter: if GGP had an European distributor, there's a lot in their back-catalogue that I'd be interested in.

Nevertheless, I put it forward for your consideration...