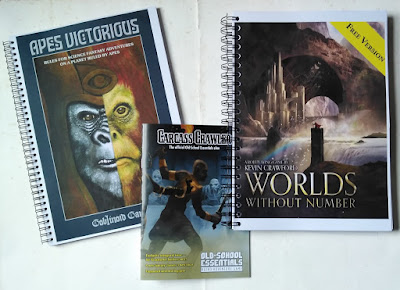 I'm a dinosaur.  I find it tricky reading and using pdf gaming resources.  So every so often I will print them off (preferably with spiral bindings) for ease of table use.

The other week I watched the recent re-boot of the Planet of the Apes films (not that recent, I know - Rise of the Planet of the Apes is almost ten years old).  I enjoyed them and it put me in mind of gaming the setting.  Or rather, gaming the setting I remember from my childhood - the 1968-1973 films, the live-action tv series and the animated series.  I'm also thinking of other 70's post-apocalyptic tv shows, such as Logan's Run and those Gene Roddenberry never quite got off the ground.

This isn't a new idea to me - I'd had the pdf of Apes Victorious from Gobliniod Games for some time.   But now I've got it printed out and I might now read it with a mind to adapting it for a one-off game.

Regular readers of my musing on RPGs will know that my system of choice is Necrotic Gnome's Old-School Essentials (OSE).  Carcass Crawler is the official zine for OSE produced by Necrotic Gnome.  Issue 0 was issued in pdf to backers of their recent Kickstarter and work is currently underway on Issue 1 which will be available in more traditional routes.

Another product of a Kickstarter, this one from Sine Nomine Publishing, a fantasy adaptation of their Sci-Fi game Stars Without Number.  I know nothing of either system, other than they've apparently been well-recieved.

I'm going to be reading this because one of my on-line gaming buddies has offered to run a session for us.  The link about is to the free version, which at 350 pages is very generous.