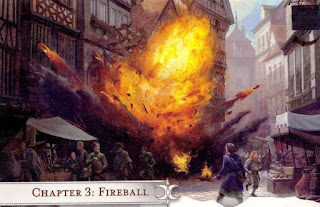 This session was based in the village of Illmire itself.  We had been gradually learning that something was amiss - old illnesses, people going missing and the like.  During a session which I'd missed, members of the party had scouted out the Old Temple and come to the conclusion that the recently-arrived priest and his followers (who were 'renovating' the building) were up to no good.  We therefore decided to have a more thorough investigation.
Yet our snooping hadn't gone unoticed.  On the way to the temple we were tricked into the local tavern - The Waggoner's Rest.  There we found that the usual staff were missing and we were waylaid by half a dozen cultists (Oh yes!  The Temple has been taken over by an Evil Cult!).  A prolonged encounter took place, a major (and probably deciding) feature of which was the use of Holmund's trusty wand of fireballs.
Interrogation of the few surviving assailants confirmed our suspicions.  The cult were worshippers of a creature that fed on fear (a large one in the swamp and a smaller one in the temple cellar), the village well had been poisoned with fear potions and human sacrifices had been taking place.  Most worryingly, the next sacrifice was due to be the barmaid from the Waggoner's (to whom one of our party had formed An Attachment).
Armed with this knowledge, we advanced on the temple at the head of a mob of villagers and had a brief parley with Fr Rand, the Chief Priest.  Under cover of the mob's activities, we crept around the back and let ourselves into the crypt... 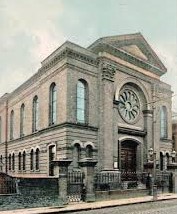 ...where we found all sorts of incrimidating evidence and useful kit.  We avoided the Thing in the Cellar and moved up into the body of the Temple itself.
Where another long combat took place.
Suffice it to say, after careful scouting and planning, the cultists were defeated, the barmaid rescued and there was tea and loot all round.  Huzzah! 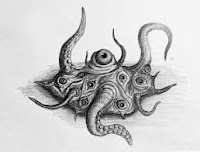 First, a bit of RP shtick interacting with the NPCs and establishing that one of my clerics was going to remain as the village priest and take an oath to cleanse the place (getting the Temple's super-dooper magical weapon in the process).  We then went and sorted out the Thing in the Cellar (which apparently was a baby compared to the Thing in the Swamp).

Having dealt with the cultists and the Thing in the Temple, we now turned to the bigger picture.  We had already learned from some of our captives and incriminating documents that the cultists had a camp in the swamps, and that the Thing was just an infant of the object of their worship - the Fearmother.  We updated the village authorities on the cultists' activities and got their support for, and promise of a reward on, the destruction of the main camp.  My cleric renewed his vow.
We then headed out to the swamp, with one of our captives as guide.  We had a brief encounter with a Mantisman, which (surprisingly for us went off peacefully) before setting up camp.  Unfortunately, during the night, we encountered three Cockatrices.  A nasty combat followed.  The upshot was that my cleric was left petrified (literally 'left petrified' - we covered him up with some leaves and moved on).
The next day, we reached the Cultists' camp.  We had just taken out the guards and accompanying Hellhounds when we call the session to a halt.
Wasters

For various personal reasons, I hadn't taken part in our on-line Wasters campaign since 14 Jan (and in the meantime, the game had shifted from fortnightly to weekly).

In this session we undertook what seemed to be a simple job - to follow the directions on a datastick (given to us as payment for a previous job) which promised to take us to a big stash.  This turned out to be an epic task (a 5-hour games session!) that resulted in death and mayhem.
Almost as soon as we reached the Wastes, we were waylaid by a couple of cops-on-the-take.  They gave our newly-bought handcart a good going over, but found nothing.  We tried to persuade them that we were low-level scavengers, looking for scrap metal.  So far, so good, but this was going to come back and bite us on the bum later.
A couple more small encounters occured before we reached our target - another waster and some rattlesnakes.  We even had the good fortune to find an old ruined bot that our Tech claimed was repairable (on to the handcart it went!).  We found our target house, but night was drawing on so we made camp in a nearby ruin where we could keep a watch out for any activity there.  A hireling fell asleep on watch, so we were all awoken by the sound of a group of scavenging birds attacking our gear.  One of my hirelings foolishly waded in to shoo them off, only for one of them to nip an artery, causing him to bleed-out on the spot.
The target building seemed uninhabited, so we moved in.  It proved to be quite trappy, to have some structural instabilities, and to be home to some feral dogs, but we eventually recovered the stash (both obvious and hidden).
With various bits of loot (cash, jewelry, advanced tech weapons and even fine dresses) and a damn big bot on the cart we were heavilly-laden.  We started our slow way back.  We soon encountered another group of Wasters and got involved in a nasty conflict with them.  Two were killed, but the survivors managed to hoist some loot off the handcart as they ran off.
And just as we reached the boundry of the safe zone...
...we encountered the donut-guzzling cops again.  Again they went through the cart.  We tried to fob them off with the dresses and some cash, but they made a move to frisk us.  As the really good valuables we hidden on my character's person, he wasn't having any of that.  I turns out that cops are tough!  Three of our crew were killed in the ensuing firefight.
Nevertheless, some of us got back.  It turned out that the bot we'd scavaged was repairable and, as an ex emergency services rescue-bot, very useful.  He was repaired, co-opted into our crew and christened Dr Klunk.
at 14:05