For many people, the enforced leisure time Lockdown gave us was a chance to put brush to paint to lead/plastic.  Not for me.  I don't think I've painted a mini for almost 18 months.  In part, that's because of the domestic upheaval of moving into a new house (which doesn't have the great natural light I used to have), but also because my 'hobby time' has taken a new direction and I've been mainly playing RPGs with theatre of the mind.  I'm hoping that some new arrivals might get me back to the paint table. 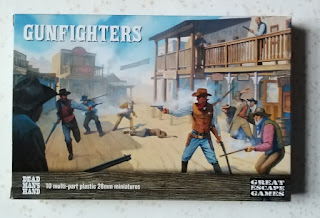 But when Bad Squiddo announced that they were going to be stocking the new Gunfighters set from Great Escape Games, I couldn't resist and signed up for a pre-order.  With commendable efficiency, the box was delivered to me yesterday, the official lauch date.
I'm not sure what I'll do with them, but I watched lots of Saturday afternoon Westerns as a kid, and couldn't resist.  And of course, being kits, they're adaptable.  Everyone loves Gunfighters in Space don't they?
So what do you get?  Two identical sprues, with enough bits to make ten 28mm minis (and have all sorts of bits left over). 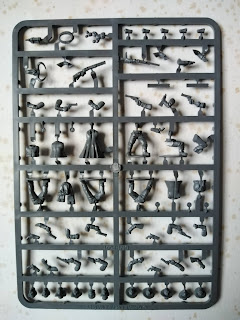 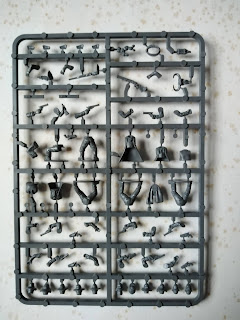 I'm not one of those people who can look at a sprue and comment on the figures (a lack a visual awareness, I suppose).  The first thing to say is that I don't see the parts to make some of the characters from the splendid box art.  Well, these things always have some artistic licence.
One the back of the box, however, there is an indication of how some of them might turn out. 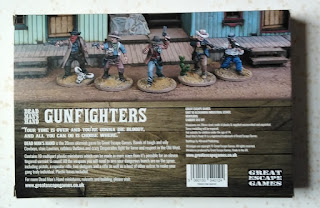 I don't have much experience of Great Escape Games' sculpts.  I remember being very disappointed back in 2014 with their group of three casualties: - two of them looked as if they'd meet their ends under a steam roller.  The fourth, however, was very charactful and ended up being a joy to paint.  I'm hoping I might be able to recapture some of that. 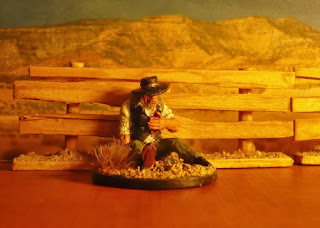 And looking at that post from 2014 reminds me that I've still got some of the Old West figures from Artizan to paint.  They're always fun.