Harry Holdsworth Rawson, the second son of Christopher Rawson of Woolwich, was born at Walton-on-the-Hill, Lancashire on 5 November 1843, and educated at Marlborough College.

He entered the Navy at the age of thirteen years and five months, and was appointed to HMS Calcutta, the flagship of Sir Michael Seymour on the China Station. As a Midshipman he served in the Second China War, being present in Calcutta’s launch at the capture of the Taku Forts in 1858. In 1860 he landed as ADC to Captain Dew of the Encounter, and was present at the second capture of the Taku Forts, the Battle of Palikao and the taking of Peking. He subsequently saw extensive service against Chinese rebels and was mentioned in despatches for the capture of Ning-po, which he held against the insurgents with 1300 Chinese under his command, and for Fungwha where he was severely wounded. One night on the Shanghai River he displayed remarkable presence of mind when he leapt from the quarterdeck of his ship and saved the life of a drowning Marine.

Promoted Sub-Lieutenant in April 1863, and Lieutenant the next month, he was one of the officers that year who took the Gunboat Empress out to Japan. Empress, a present from Queen Victoria to the Mikado, was the first modern ship of the Japanese navy. Having specialised in gunnery, Rawson served as First Lieutenant of the Bellerophon in the Channel, and was appointed in January 1870 to the Royal Yacht.

In August 1871 he gained the Royal Humane Society’s silver medal and the Civic Cross of Belgium, second class, for saving life at Antwerp.  Advanced to the rank of Commander the next month he served two commissions in Hercules in the Channel and Mediterranean, and in June 1877 was promoted Captain. In November of that year, he was appointed to the Minotaur as Flag Captain to Lord John Hay in the Channel. In 1878 he hoisted the Union Jack at Nicosia and served there as Commandant for a month.

Following further service with the Channel Squadron, he was appointed to the Thalia and served as Principal Transport Officer in the Egyptian campaign. Created a CB for services in Egypt, he next served from February 1883 to September 1885, again as Flag Captain to Lord John Hay, the Commander-in-Chief in the Mediterranean. He was then appointed Captain of the Steam Reserve at Devonport. From 1889 to 1891 he commanded the battleship Benbow in the Mediterranean, and from August 1890 until promotion to flag rank on 14 February 1892, served as an ADC to the Queen. Between 1895 and 1898 Rear Admiral Rawson served as Commander-in-Chief on the Cape of Good Hope and West Coast of Africa Station, with his flag in the St George. In August 1895 he landed the brigade that captured M’wele, the stronghold of the rebel leader Mbaruk, and effectively ended the Arab domination of the Kenyan coast. In August 1896, he ordered part of his squadron to bombard the palace at Zanzibar and thereby disposed of the pretender to the throne. For this service Rawson received the Orders of Hamud, 1st grade, and the Brilliant Star of Zanzibar, 3rd grade, from the rightful Sultan, and when his action was officially approved he gained the thanks of the Admiralty. In February 1897 Rawson landed with the Naval Brigade drawn from his squadron and commanded it in the successful expedition to capture Benin City and punish Chief Overiami for indulging in human sacrifice and slave trading.

For services on the Cape of Good Hope and West Coast of Africa Station, he was created a KCB, and on 19 March 1898 advanced to Vice-Admiral. From 1898 to 1901 he commanded the Channel Squadron, and after a brief period as president of a committee investigating the structural strength of torpedo-boat destroyers, he was appointed Governor of New South Wales. He proved a popular Governor and in 1908 his term of office was extended by one year to May 1909. Promoted Admiral in August 1903, he retired on 3 November 1908, and was made a GCB in June 1906 and a GCMG in November 1909. Admiral Rawson died on 3 November 1910, and is buried at Bracknell parish church. 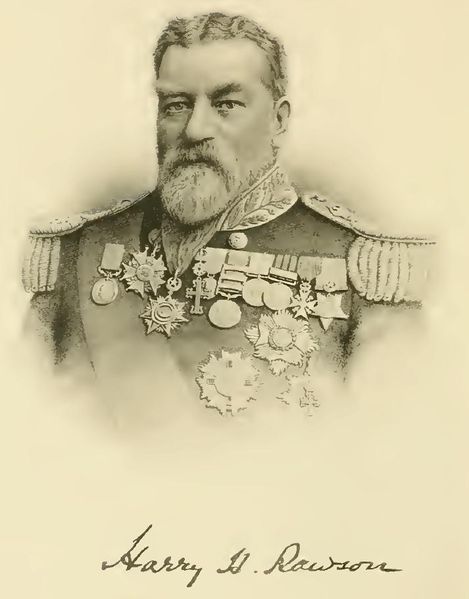 Admiral Rawson's medals were sold at DNW in Oct 1996 as part of the break-up of Capt K Douglas-Morris' peerless collection of medals to the Royal Navy (much of this blog entry is stolen from their catalogue entry).

The Wikipedia entry on Rawson has several inaccuracies in listing his medal entitlement, and should not be trusted.