I had intended to blog about Caesar, Edward VII's dog, who won the hearts of the British people and caused the ire of Kaiser Wilhelm by being given prominence at the King's funeral in 1910.

However, in looking around on the web, I found that it's already been done so well that I can't better it. Read this, it's a good story (skip the comment though - most were written by people who think they were channeling their dogs). 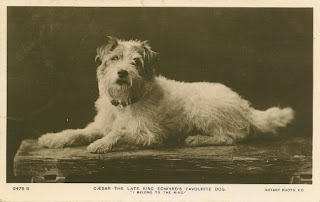