Sorry not to have posted properly of late - I've been distracted by other things, so this has run the risk of just being a list of the Obits and Books posts (which are easy to do!).  I'm going to have to make a better effort to bring back some of the 'regulars' [sic].  Even The Wife asked where the Mustaches had gone (and she doesn't read the blog!). 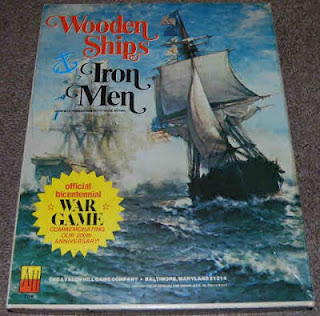 This morning I was walking past our local charity shop when I saw that they had a copy of the American Bicentennial edition of Avalon Hill's Wooden Ships and Iron Men, untouched in it's box. It's a wargame simulating sea battles from the Age of Sail.  It was only £1.00, so I picked it up.

As I've said before, I've often toyed with the idea of wargaming and I'd heard of this game before, partly because of that and partly because of my maritime interests. BoardGameGeek rates it fairly highly, says that the rules aren't too tricky, that it's recommended for ages 12+ and can be played in about an hour.

Looking at the pictures there, it looks like many people use their own little ships rather than the cardboard counters provided in the box.  That does appeal, though I haven't got anything to hand.  We don't have a printer at the moment (still less a laminator), or I'd download some of the ships I've seen in the past on the Junior General.

Email ThisBlogThis!Share to TwitterShare to FacebookShare to Pinterest
Labels: About me, Games