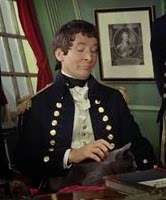 The captain took another sip of his coffee and gave a grim smile as he read the morning's report.*  Damn, but this blockade business was tedious!  Weeks of turn-in and turn-out had become months, and now Autumn was here.  Yet there was good news - last night's storm had dispersed the Inner Squadron but, as anticipated, this meant that the Spaniards were taking the gamble of attempting to break out of port.  An engagement was at last in the offing!

At the moment he was at the rear of the squadron, hampered by being in company with the Admiral, but he hoped to be in the thick of it soon.  The Inconsistent would give a good showing of herself, he was sure.  She was a sweet sailor and the crew were well-trained - fierce as tygers, every one!  Perhaps this was what he needed to Be Noticed and be free of this posting.

He considered the chart again.  Time for a glass of Madeira and to write another letter to his uncle, the earl, about the incompetencies of his superiors...

*The full sitrep can be read here.


The Fun is Here!


Well, Clint has posted the starting positions for his Play-by-Blog game (henceforward PBB) and it's a Break the Blockade scenario.

He's even allowed for the possibility of late entrants to the game.

I'm in the British squadron, commanding a third-rate, HMS Inconsistent (64).  Our disposition gives little to do for the time being but to get used to issuing sailing instructions, but that's not a bad thing!

As I said the other day, I'm new to both PBB and naval wargames.  As Diplomatist Books has a stock of Blood, Bilge and Iron Balls, I've made use of my five-finger discount and tried to familiarise myself with the rules.  I've decided that the best thing was to print out a couple of the ship tokens and do some test runs, seeing how the squadrons can position themselves...