As contrary to my intentions my Painting Challenge submissions have had a distinct Dr Who theme* I needed to restock the lead pile.  Accordingly, I bought these BTD figures when they came up on eBay.

*The Wife:  "Are we ever going to get to play that Frostgrave game?  Where are my wizards?"

I didn't realise until I started priming them, but one of the Ice Lords has been converted, giving a variant.  I may nominate him as a Grand Marshall or Supreme Lord.

The fillip that the Painting Challenge throws up worked its magic and the Yetis were soon painted, 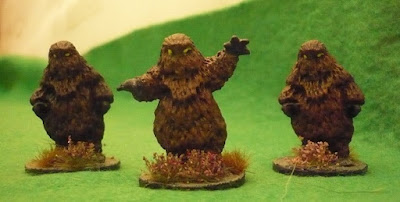 I didn't want to go for the proper colours (which make me think of honey bears), but instead did a simple  job, with dry-brushing in various shades of brown.  They'll also do as generic furries in other games.

With the bases, I wanted to represent their origins in the wild Snowdonian Tibetan valleys.  Not being able to find any rhododendron leaves to scale, I instead went for bleak tufts and heather.

It seems that Yetis have a nemisis... 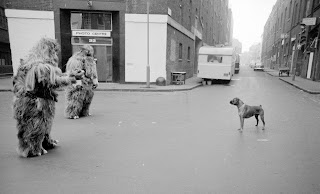 Secondly, a stray Cyberman who escaped the bunch I submitted for the Nostalgia Round.  He too is from BTD. 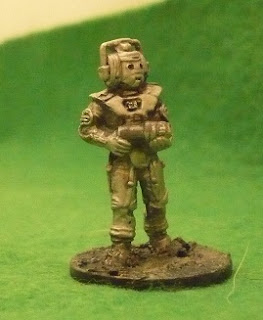 And finally, I submitted one of the ever-popular Weeping Angels*.  This was one of a bag of mixed figures I picked up in a charity shop.  I think they were freebies with Doctor Who Monthly.  The Angels were an odd soft plastic which didn't take paint particularly well.  It left them quite sticky (which in hindsight made static grass a rather poor basing choice!) 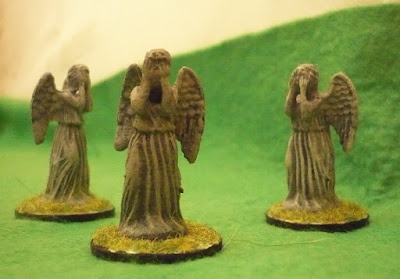 * Only one of these three was started and completed during the challenge. 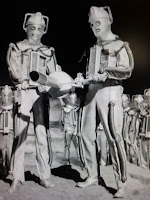