Despite what I posted yesterday I did manage to pop into Norwich this morning for Diceni.  This event is now in its fourth* year - it seems settled into the first weekend in May.  The only other time I've made it was in 2014,** but if my own experience of the day is anything to go by, attendance seems to be growing.


*Or third?
** Checking my Loot Post I see several items that haven't been painted two years on...

Note that I don't describe Diceni as a Wargames Show*.  I suspect that the catchment area of people willing to travel to Norwich for a purely wargames show isn't large enough to reach critical mass.  It is dwarfed by even medium-sized Wargames Shows such as Peterborough.  Whether this is a factor or not - I have no knowledge of the origins or organisation of the event - Diceni is a "Tabletop Gaming and Cosplay Show"**.


* Or do I mean a 'Strategy Games" Show?
** Norwich also has a "Gaming Show" in the same venue earlier in the year.  That seems to be devoted to computer games.

Some readers might not like to hear this, but I think that this combined approach makes for a better atmosphere.  I'm sure there are grumpy old pedants involved in cosplay and boardgames just as in wargaming, but if  so they're not so at the fore!  Today they was a great, friendly and fun with a high proportion of families and passers-by looking around*.


* The venue being slap-bang in the centre of Norwich and entry being free probably had a lot to do with that. 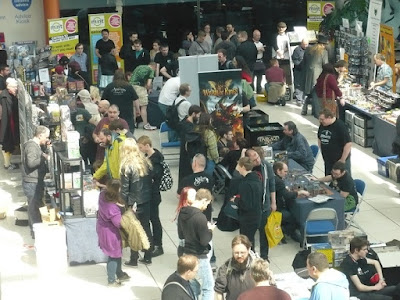 Oddly enough though I didn't see any mention that yesterday was International Tabletop Day 2016 - was this a missed opportunity to slipstream on their marketing?  However, there was apparently  something called the GreatGeekMeet was happening as well*.  In the past the Norwich Sci-Fi and Star Wars groups have been involved as well.


* Though as you'll see from my photos there weren't any geeks to be seen!

But to the tabletop activities...

Being shy by nature I didn't take many photos or talk to many people, but these might give a taste of what was there.  Those expecting the big tables one sees at wargames shows would have been disappointed - though I'm sure the organisers wouldn't turn one down if someone offered to put a big-table game on! 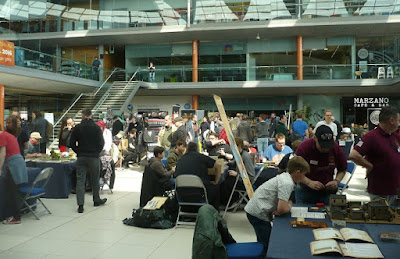 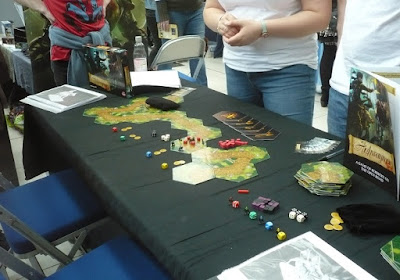 And traders?  They included Warlord Games, Cymbeline games,  Langleys (the local toyshop), Counter Attack, MMM Games, Miniature Men, The Assault Group and Utherwald Press.  One trader told me that having a much smaller stall than usual meant gambling a little on what would sell, but he seemed confident enough.  Sadly, Fenris Games although advertised weren't there - possibly because of their temporary closure.  That's a shame, but probably good for my wallet.  Which brings me to...

As always, I tried to be modest about the loot,  I resisted the blashisments of MMM's pre-owned figures, but I did bring some things home with me. 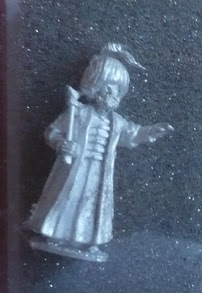 As I was looking at the TAG stall the guy told me the price of the six-figure and cavalry blister packs.  "And the individual figures?"  I asked.  It turns out that these were freebies that they'd brought along* in theory to give to people in costume** but had decided to hand out anyway.

*I see from their website that normally you get one of these when you spend £39 mail order.
** I'd come along as a fat, bearded, grumpy middle-aged man.

Giving me a freebie had the desired effect and I later went back and bought a pack of their Goons in President Masks - nicely painted up on their gallery page. 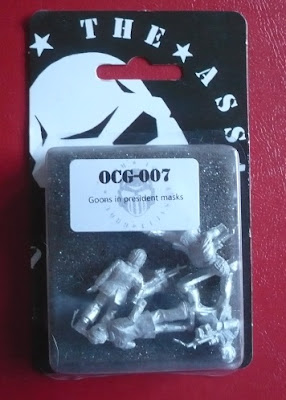 There was no special figure for this year's event, but I bought a d10 to mark the occasion. 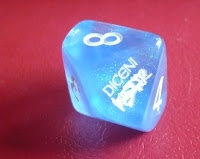 And other than that there were just a couple of Bones figures that I thought might come in as Frostgrave spellcasters.

I've not painted Bones before, but the Not-Illithid looks like it'll be fun (he'll also come in for interaction with Pulp cultists).