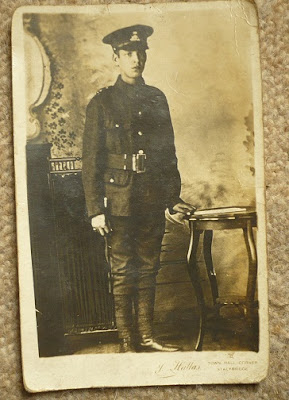 I'm a little late in marking this centenary, but on 27/28 June 1916 William Ollerenshaw of the 10th Battalion Lancashire Fusiliers was killed, aged 18,  in the build-up to the Battle of the Somme.  He was my Great Uncle.

The 10th Battalion was raised in Bury, Lancs, in September 1914 as part of Kichtchener's New Army.  It disembarked at Boulonge on 15 July 1915 as part of the 52nd (Infantry) Brigade of the 17th (Northern) Division.

I know practically nothing of the circumstances of Wiilie's death.  The Battalion War Diary (WO 95/2012/1 at The National Archives) only gives a few pages to June 1916.   Her are the events around Willie's death, which took part during the build-up to the great offensive on 1 July 1916.


23rd
Take over 20th Brigade Front from 2nd Gordons of 8th Division
23rd-28th
Gas and smoke attacks and a practically continuous bombardment of the enemy by our artillery.  At times for an hour intensive.  Enemy replying by M.G. fire at night and a vigorous shelling of our trenches.  Casualties during this period - Killed - Wounded - Missing.*  That they were not greater due to the excellent trenches and 'dug-outs' and also the large extents of front held.
28th
The Battn relieved by 2nd Gordons, 2nd Boarders of 9th Division

*Frustratingly, these details were never filled in.

William Ollerenshaw is buried at the Citadel New Military Cemetery at Fricourt.  The Commonwealth War Graves Commission describes the cemetery


The cemetery is in the Northern part of a valley, running from Fricourt to the Somme, which was known in 1916 as "Happy Valley." It was begun by French troops and from August 1915, when the first Commonwealth burials were made, it was known as the Citadel Military Cemetery (Point 71). It was used until November 1916 and once in August 1918. The great majority of the burials were carried out from field ambulances before the Battles of the Somme. In the Autumn of 1916 the Citadel became a large camp for units withdrawn from the line.

He is also commemorated, along with 627 others, on the Stalybridge War Memorial which was unveiled in November 1921.  The memorial takes the form of a low curving wall, flanking Trinity Street - making an approach to the bridge over the Tame.  It's relatively difficult to take a photo of it, but the one below from this site catches it quite well. 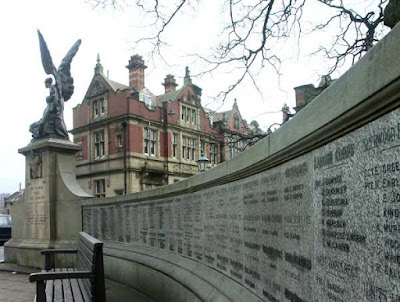