Well, I've made a really bad start to the AHPC 'Ate.  This was going to be the year when I had everything organised,  submitted for each of the bonus rounds and met my target.  Ha!

I missed the 'Flight' bonus round (I had a Canard I was going to submit).  But in making this submission, I've avoided the automatic disqualification by a hair's breath.  It wouldn't have been the end of the world, but I enter the Challenge because it makes me sit down and paint (which I do enjoy).  I just feel guilty taking up a slot on the roster.  Perhaps things will be better if I get my new glasses this month. 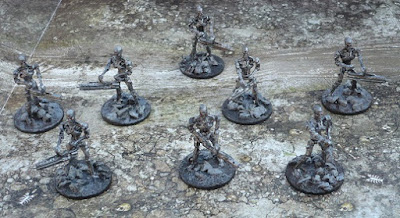 The Terminators have done it again!  Skynet has sent a whole squad even further back in time than before in order to kill the ancestors of the leaders of the Resistance (Skynet's forte has never been originality). 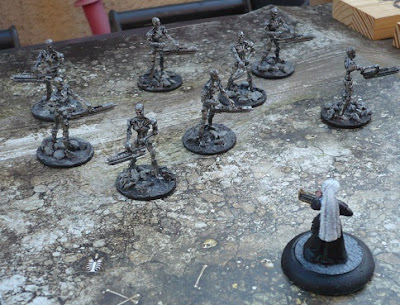 With Sarah Connor less than a twinkle in her grandfather's eye, who is going to step up to save the future, and possibly even delay Judgement Day once again? 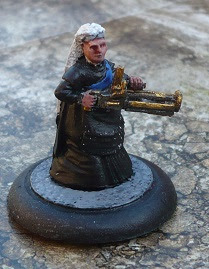 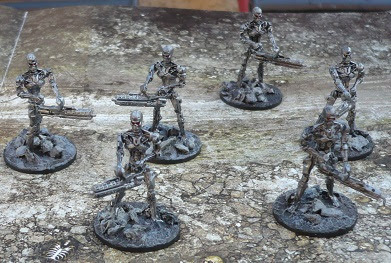 Here were have eight 28mm Terminator Endoskeletons from the Warlord Games/River Horse Terminator Genysis miniatures game.  These are described in their blurb as being in "two different posses, advancing and… relentlessly advancing!".  In practice, this means that some of the Terminators carry their BFG in their right hand and some in their left (which made them easier to put together once I'd realised that!).  Box sets can now be picked up cheaply, and for me the Endos will serve as generic BFG-Wielding Robots.

Queen Victoria is from Westwind Productions'  Empire of the Dead range.  A nice, fun sculpt.
at 14:57