We had three short, ultimately frustrating, delves into the 'Maze on Sunday.  The write-up for the first one is a little longer, so I'll post that today, and the other two together tomorrow.

Six months had passed since the last delve due to the rainy season flooding the Barrowmaze.  We have now entered 843CR.

Galmar (Ranger) had gone to Ironguard Motte for research in the archives to see what lore, maps or other information could be found on the ‘Maze.  He had written back that the lore-masters kept their secrets close, but that he had met a disreputable ex-archivist who was going to sell him some maps.  Nothing more has been heard from him since.

Moonwhisper (Mage) and Blake (Cleric of St Ygg) had gone off to a newly-opened pyramid in search of the fabled lost city beneath it.  There they had partied with Grump and Kindroleth and seduced them with tales of the riches to be found in the ‘Maze.  A third new member of the party, Petal (Druid) had seen the posters Cedric had put up around Helix and joined along with her potted plant.

Natalia has built a house in Helix: 60x60ft made of stone, and with an attached gym, it is much more substantial than Galmar’s House.  Galmar keeps furtively disappearing into his cellar with a shovel.

Galmar has developed an interest verging on obsession with the liquids recovered from the room with three pools which form Chaos Potions.  He has been mixing various combinations and recording the results.

The Silver Standard Caravan Company’s base in Helix is now closed.  To the party’s surprise, Merg, their former hireling, has returned with his family.  He has realised that delving is a mug’s game and that the true wealth will be made by the middle-men and service-providers.  Accordingly, he is now running Merg’s Mercenaries, introducing hirelings and henchmen to adventuring parties.  Merg couldn’t provide a discount, but would advise his people that the party were a reputable one.

The pre-delve plan was to go back over some old territory and fill in the gaps in the maps – several options for further exploration were discussed and it was finally decided to go through the ‘Front Door’, to proceed to the room where Ranya was killed by the giant snake and then head north (possibly joining up with other, known territory to the east.)

The journey through the Wilderness was uneventful.  Due to the season it was hard going (4.5 hours).
Reaching Five Finger Mound the party entered and found the familiar tripod over the hole in the floor.

Kindroleth and Esme examined the mound for surprises while Natalia checked the integrity of the tripod.  As expected the rope, having been underwater during the floods, was slippery.  As Natalia began to fix her own rope up, Grump, our barbarian-like fighter, lost patience and attempted to climb down with a lantern.  He immediately lost his grip and fell, smashing the light.  There was no answer to our shouts to him. 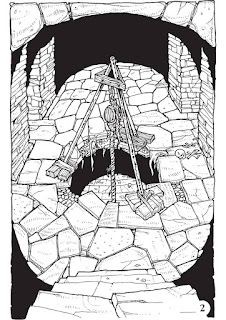 Natalia finished fixing her rope and descended the 40ft to the ‘Maze proper.  Next to a pool of burning oil she found Grump’s dead, broken body.

She was suddenly attacked by two giant centipedes.  Having been bitten, venom took effect and she collapsed.  The rest of the party used ranged weapons to kill the centipedes from above.

Having seen her employer killed and Natalia attacked, Beatrice lost courage and refused to enter the ‘Maze.  She declined the suggestion that she stand guard at the entrance and return to Helix with the rest of the party, instead heading off on her own.

The party went down into the entrance room, tried to assist Natalia and stripped Grump’s body of anything of use.

As those members who hadn’t been in the ‘Maze before were acclimatising and examining the wall carvings, they heard a sound from the corridor and were attacked by six skeletons.  These were defeated, but not until Kenroleth and Galmar had both been severely wounded: Kenroleth, it turned out, fatally.

With two members dead, one severely wounded, one poisoned and a hireling having deserted, the party had no choice but to call it a day and attempt to return to Helix safely.  Nobody thought to examine the skeletons’ remains.

The return journey took 6 hours but there were no encounters.  There was no sign of Beatrice.

Natalia was taken to Brother Othar for healing, but he prescribed bed-rest.  She and Galmar healed-up over the next 8 days.

The gold recovered from Grump’s body was added to group funds.