Barrowmaze #9: The Difference a Year Makes (A Tale of Two Maps)

Yesterday was the anniversary of our group's delving into the Barrowmaze.


On that occasion we didn't actually make it into the Barrowmaze proper, but met a near TPK in the Barrowmounds.  A couple of weeks later we went back and finally got inside.  I started my role of map-maker (or rather a chain of my characters have). 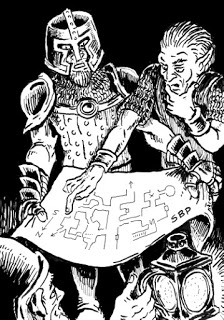 There is a moderately amusing tale behind the latest map.

I ordered a printout specially to mark the anniversary session, but was annoyed when I was unable to pick it up from the printers' when they'd promised.  I went in this lunchtime ready to demand refunds/compensation, only to be told that the lad who had taken my order had confused centimetres and inches.  We've now got a map a couple of Halflings could sleep under for no extra cost!  That's a foot-rule in the picture above.