Barrowmaze #11: Return to the Skeleton Room

This may be obvious but these AARs contain spoilers for those wanting to go into the Barrowmaze.  The message is that if you're going to, don't take advantage of them.  They're called spoilers because they spoil the fun.  DON'T BE A DICK!
I’ve several delves to catch up on, so there’s going to be a spate of reports.  Also, I missed a few, so there may be some disjointedness in narrative.  There were three delves on 30 June, but I only took part in (and thus have notes on) the first two; this is the report on the second, with a para appended on the third.

To undertake the plan we failed to address in the previous delve: that is, to return to the Skeleton Room and explore further.

Three days were needed to heal up after the last delve.

A visit was made to Merg’s Mercenaries to recruit hirelings to replace those killed by the zombies.  Two were hired as Wuss’ men:  Clewd Wenvelman a Man-at-Arms at 22gp per delve, and Melnor Glass a Level 0 Fighter at16gp per delve.

Wuss visited the Church of St Ygg and paid his respects to Brother Othar.  He received a blessing and a free (!) vial of Holy Water.  The six-hour journey to the Barrowmoors was uneventful.

We entered via the Back Door and proceeded through the Crossroads of Death without incident.  However on turning west into the Statue Widening, the party found the floor covered in blood and hundreds of silver pieces. 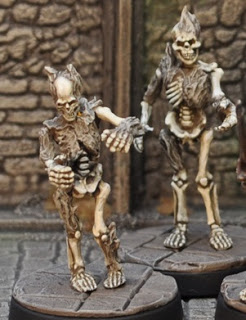 Before we were able to examine this, five Fossil Skeletons appeared from further up the corridor.  Wuss attempted unsuccessfully to Turn Undead.  In the hard fight that followed, the hirelings proved very useful, but Melno was killed.  Once the skellies were defeated, we established that the blood came from the bodies of a group of adventurers, their sacks split and cascading silver everywhere.  While Decimus searched the bodies, the others bagged up over 3,000sp.  This was cached in order to be picked up on the return journey.


We then proceeded into Necromancer territory, through the Octagonal Room and into the Skeleton Room. 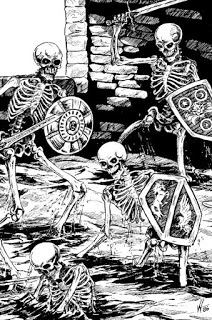 There we found the six surviving skeletons from the previous encounter. This time Wuss’ Turn Undead was successful, and five of the skeletons were picked off.  As one of them attempted to flee it was observed to be scrabbling at the wall in the back of an alcove: we surmised that there might be a secret door there.  We noted this and proceeded to loot the alcoves left over from the last time. 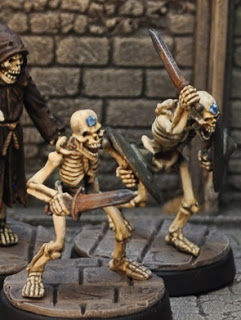 While doing this, we were attacked by Sapphire Skeletons.


We were in a difficult position as we were in single-file down a narrow corridor.  One of the Turned skeletons had fled down the corridor and Wuss was holding his Turn.  At the entrance to the corridor (from which direction the Sapphire Skellies were approaching us) was a pit, which could only be crossed by one person or creature at a time.  Gorgon took up position at the mouth of the corridor, the rest of us using ranged weapons.  Gorgon fought extremely well, disrupting several skeletons (one of which fell into the pit), however, he had great difficulty in destroying the sapphires that reanimated them.  In the end his efforts weren’t enough and he was killed, Clewd being severely wounded.

We proceeded down the corridor to the unexplored room we already knew was down there.  In it we found a funerary slab, on which lay a desiccated body with a shield and axe.  Cowering in the corner of the room was the Turned skelly that had fled from Wuss.  Wanting to avoid any more combat, we foolishly decided to leave this skelly be, and Wuss held his Turn. 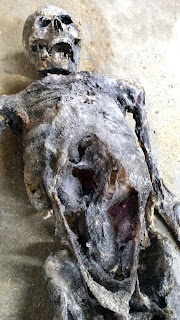 Decimus then approached the body.  Perhaps predictably, it animated when he attempted to remove the axe and attacked him.  With Melno and Gorgon dead, Wuss holding the Turn and Decimus almost immediately incapacitated, this just left Moonwhisper and Clywd to battle the creature.  They were successful, but by the end Clewd was also hors de combat.  The shield was determined to be nothing special, but the axe was retrieved.

The party was now left in a quandary.  Only Moonwhisper and Wuss could walk, and they would have to carry Decimus and Clewd back to Helix.  As Decimus’ insistence the rest of the alcoves in the Skeleton Room were looted (though the secret door was left unopened).  As assessment of what could be carried (including the previously cached silver) was made and the party headed out of the Barrowmaze and to Helix.

Fortunately no encounters were met on the withdrawal from the ‘Maze or the extremely slow progress through the Wilderness.
Post-Delve

The axe was identified as ‘Deepshine’, an enchanted Dwarven weapon.  In addition to its enhanced combat effectiveness, it had the ability to cast light out in a 15-foot radius.  It was allocated to Decimus.

I had to leave before the end of the second delve, so have no notes of the third.

Moonwhisper, Wuss and Vlad’s new character (an illusionist) returned to the Barrowmaze.  While there they got as far as the Skeleton Room and finished off the skelly left in the pit.  They picked up the rest of the cached coinage.
at 15:54