Following my attempt to do a Fleet Action using Blood, Bilge and Iron Balls (BBIB) the other week last night on impulse I cleared the decks (well, the kitchen table) to try a single-ship action.  I want to master these relatively simple rules beofe moving on to anything more complicated. 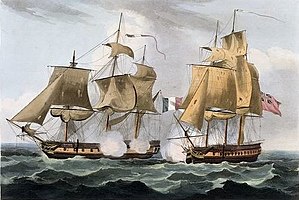 Accordingly, French and British 38-gun frigates faced up against each other.  The results were to prove surprisingly one-sided...

The first two turns consisted of manoeuvering, neither side taking the chance of a long-range shot ('cause I hadn't read the rules properly!)  The French had the advantage of the wind and this proved decisive.

Each turn consist of the following phases, the sequence determined by lot:-

The French were able to open fire at medium range, scoring two hits (as 38s, each ship started with 3d6: as medium range they need to roll 4 or above to hit).  These caused damage to the masts but also, more significantly, to the steerage gear.

Although this attack was followed by a British repair phase, attempts to repair the steering gear was unsuccessful.  The British were therefore unable to turn: as a result they were couldn't make any headway into the wind, or to bring their guns to bear.

However, the French were able to fire another broadside.  There was only one hit, but this was sufficient to bring the damaged mast down!

The French ship now placed itself in position for a perfect raking bow shot.  It was forutnate for the British that she had already fired her broadside!  The British were again unable to bring their guns to bear, but were at least now able to manoeuver.

In turn 5 neither side could bring their guns to bear, nor had any repairable damage.  The British movements were, of course, hampered by only having two of her three masts.

Although the French were able to fire during Turn 6, all their shots missed.

Br sail
Fr repair
Fr sail
Fr fire
Br repair
Br fire
The French ship again placed itself in position for a raking bow shot, and on this occasion was able to take it.  Although there was only one hit, it was decisive, taking out a second of the British masts.

Turn 8 started with a French firing phase.  Still in position to make a raking shot, this broadside was devastating.  Four fires were started and the third and last British mast was damaged, as was the steerage gear.  With over two-thirds of his effective crew out of action, the British captain had no choice but to strike his colours, without having fired a shot.  A court-martial beckoned if he ever returned to England.
A triumph of French seamanship and gunnery. 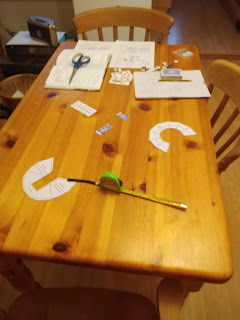