Dark Sun #3: The One Where We Got Kanks All Round and Another Mission

Fourth session of an on-going campaign.

Our party had been hired by Sidar Jai Kurlak, head of one of the merchant houses of Urik, to recover his daughter Aspis, who had apparently been kidnapped by a group of escaping slaves.   When we caught up with them, it turned out that Aspis was a willing victim and was aiming to start an uprising that would destroy her father and the basis of the Urik economy.  We declined to assist her, knocked her out and got her back across the desert.

Once we returned to Urik, we found the city under attack from a dragon and in chaos.  Kurlak was preparing to escape to his country estate and was unwilling to pause to pay us.  We reluctantly agreed to act as guards for him and his party.  While travelling across the city, we were ambushed by a party of elves.  Aspis originally helped them, but once she saw her father seriously injured changed her mind.  We defeated the elves and, as the dragon had gone, returned to the Kurlak Mansion.

Back at the mansion, Jai Kurlak rested and took refreshments, allowing his daughter to deal with our business (he had received healing from Frayne and Garrok).

Aspis found an excuse to send Frayne away.

She made a half-hearted apology for her actions and explained that she now realised that we were people to be taken seriously.  If we would listen, she could offer us a mission that would not only be of the utmost importance, but would be worth our while to undertake.

She had excluded Frayne because, as a Templar of Hamanu the Sorcerer-King, she did not know if he was to be trusted.  She explained that she is a leader in a conspiracy to overthrow the king and that the slave revolt was to be the first step in this.

A similar revolt is to take place in the city of Tyr to overthrow their own tyrant.  Aspis is in contact with the rebels there – a group of mages known as the Veiled Alliance.

However, now that the dragon had appeared her plans have changed.  It was known that Hamanu planned to send an army attack Tyr.  She believes that the dragon’s arrival will only hasten this attack.  If the Tyr uprising takes place, that city will be weakened and fall to Hamanu: if that happens, he will be in such a strong position that any attempt to overthrow him will fail.  Both cities will remain under his rule.

She therefore asks that we take a message to her opposite number – Agis of House Astricles – asking him to postpone the Alliance’s plans.  She gave us an olivine crystal as a token to present to him (and with a hint that it may be of other use to us).

Rewards are Dished Out

At this point, Gre’kkt and Garrok pointed out that we had been of much service to House Kurlak already.  We had fulfilled our contract to retrieve Aspis, and had saved the life of the Sirdar himself.  During these actions, several of our retainers had been killed.  We had not yet received payment.

Kurlak immediately saw the point.  With the city in turmoil, he could not give us cash, he said, but he did have several family heirlooms of great value.  He promised that if we undertook Aspis’ mission, upon which the future of his House depended, much more would follow.

First, he wished to compensate Gre’kkt for the death of her nephew, who had been killed during the fight in the marketplace.  He presented her with the slave Fribb.  Fribb “was not very intelligent, nor particularly appealing”, but he was loyal; he had done much reliable service to House Kurlak.  Gre’kkt also received a bladder of the finest brandy and a promise to further her trading ambitions. 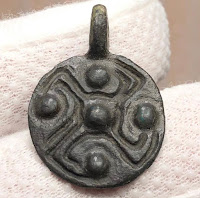 Frayne, who had now returned, received a suit of armour and a shield; Geo, a bronze amulet of strange design; Unayra, an iron dagger; and Garrok a bowl of fruit each blessed with miraculous powers.  In addition, and to hasten our passage to Tyr, Kurlak presented with us three mounts with tents and letters of passage as agents of House Kurlak.

Gre’kkt additionally, negotiated for equipment to incubate her silkwyrm eggs and left her broken metal sword with him for repair.

The Feds Arrive, and Frayne Makes a Choice

As this point, a slave rushed in and announced that a Templar was at the gate, demanding admission.  Kai and Aspis urged the party to retreat to the wine cellar.  Frayne offered to remain, in order to soothe things over, and Unayra hid in a nearby pot.
The Templar, who was accompanied by four half-giants, turned out to be Antephos – an old rival of Frayne’s late master and his nemesis.  He demanded that Aspis accompany him and face questioning regarding her recent activities.  Frayne’s attempts to talk him out of this were unsuccessful and things looked bleak.  Aspis again took matters into her own hands, casting a spell which destroyed two of the giants in a gout of flame.  In the ensuing fight, Antephos and his giants were killed.  The party concluded that it was time to get out of Urik, and left Kurlak with the task of disposing of the bodies.  It was hoped that the Sorcerer-King never learned of Fraynes part in this.

As we left, Aspis told Frayne that she was grateful for his attempts to protect her: she now looked upon him in a new light...

The party took the main road south to Tyr.  In leaving the city, we again noticed the devastation wrought by the dragon: ruined buildings and desiccated bodies.

We camped through the day, and travelled at night.  We met a slave caravan heading north and, exchanged news with them.  They advised us that they were probably the last caravan to come out of Tyr as King Kalak had commandeered all slaves to work on a mad project to complete his giant ziggurat.  Indeed, they warned, as we travelled south we should be on the lookout for Kalak’s forces rounding up more labourers.

We did indeed see such a pressgang on the road and, forewarned, was able to avoid it.  From then on we travelled off the main highway.  We made camp in the stony barrens.

Several of us had strange dreams, reflecting our worse fears.  Fribb woke to find himself abandoned, his new mistress a diminishing dot on the horizon; Garrok found himself forced into combat with Gre’kkt; Unayra found herself in a cage, captured by the pressgang.  Gre’kkt – who of course, needs no sleep – was on watch and puzzled that Fribb and Garrok were each calling her name in their sleep.  She attempted to wake Garrok, only for him to attack her.  She shrugged him off, and went to rouse the others.

It turned out that a Gaj had made its way into Fribb’s tent and was making a psionic attack.  Both Garrok and Gre’kkt were paralysed with overwhelming fear. Unayra was able to make some hits, and finally Geo was again able to put his trusty impaler to good use.