So what did I read in June?

As I recall it, I read a book by Keating (probably The Perfect Murder) when I was in Sixth Form and trying out all sorts of things to see where my tastes lay*.  I remember not being very impressed and wondering why people rated him.  This book hasn't done anything to change that opinion.  Back when I was 17 I would have felt honour-bound to finish a book I'd started (this is only about 200 pages); but now I know better, and I gave up on it after the first two stories.

If your tastes run to comedy Cockneys and char-lady-puts-The-Establishment-in-its-place, this might be the book for you.  It's not for me.


*As it happened, a few years later I was given a masterclass in appreciating C20th crime fiction by my eventual wife.

I've really enjoyed reading this, despite some of the fifteen chapters (fifteen subjects and fifteen authors) being distinctly dry.  Over the years I've read a lot of naval history, and it was good to return to a subject I've neglected of late.

In addition, most of my reading has been from the Revolutionary/Napolenic Wars onwards (the studies in this book start with the Restoration Navy and the 'Glorious Revolution'), so it was instructive to read about an earlier period.  That, of course, was the avowed purpose of the volume, which was published during the 'Nelson decade' (ie, beteweeen the bicentenaries of the Battles of the Nile and of Trafalgar).

Given this, and the JD Davies fiction I've been reading lately, don't be surprised if I go on a C17th and C18th naval binge (as far as my home library will allow)!

This is a well-writen and readable account of the dawn of geology and paleontology as sciences in early C19th Britain (the word 'scientist' is a neologism of 1834 arising from popular discussion of these debates).

If I may be allowed some more autobiography*, this book invoked some pleasant memories.  Back in 1980-something when I was wondering what to study university I briefly considered History of Science (blame James Burke's 'Connections', Carl Sagen and Saturday mornings watching Open University programmes before the Westerns came on) before settling on Theology.  A course on The Church in the Modern World included a section on (Geology and) the Victorian Crisis of Faith, and installed in me a fascination with C19th Church History.  Various things followed, and one of the places I ended up working in had walls that look like this...

All very obscure, I know: but that's 'connections' for you. 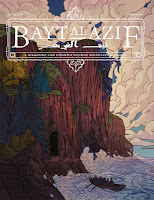 There's a detailed review here which says more about the magazine that I could here: though I wouldn't be so hard on the production values, which I didn't have a problem with.

For me the stand-out articles are the Reveiw of 2017, the scenario by Jared Smith set in C8th Damascus and a scenario by Rich McKee set during the Vietnam War (with added pointers to a world-wide DELTA GREEN type campaign).

If money was no object I'd be buying more on Cthulhu Mythos RPGs, but it isn't and most of the stuff out there is too expensive for me.  The eternal truths will have to remain shrouded from my prying eyes...

A collection of short stories in the Crime Masterworks series by an author I'd not heard of before.  These really are well-crafted little gems - most dryly humorous.