Dark Sun No 4: The One With (Legalised) Highway Robbery and Frayne's Undead Army

Fifth session of an on-going campaign.

Following our rescue of the Rebel Princess retrieval of the radicalised heiress we have learnt that she is part of a wide-spread network aiming to overthrow the Sorcerer-Kings of Athas.  She has information that leads her to believe that it is essential that her counterparts in Tyr – The Veiled Alliance – postpone their revolt.  With the promise of rich rewards, we have agreed to convey this message from Urik to Tyr.

Our last session ended just as we had defeated psychic attacks from a Gaj.

Despite our lack of rest, as the unforgiving sun set we determined to press on and make as much headway as possible in the cool of the night.  As if an omen (for ill or good?) one of Gre’kkt’s cargo of silkwyms hatched.

As we headed west to Tyr, Unayra speculated about the nature of the dragon we had seen attack Ulrik, and even suggested that we turn around and make the long journey back to the city in order to investigate.

After two hours of listening to her prattle on, Geo spotted lights on the road ahead.  We had reached the crossroad oasis of Silver Springs.  Gre’kkt, a seasoned traveller in these parts, advised us that the oasis was owned by the Elves of the Silver Hand, who charged a levy for entry into the walled-settlement and ran a disreputable bazaar.  True enough, as we got closer we saw that the road ran through a toll-gate guarded by two elves.  The suggestion that we go and investigate the bazaar was greeted by an annoyed chittering from Gre’kkt, who withdrew with her kanks and insisted that she would skirt around and meet the rest of the party on the other side.  Fribb followed his new mistress, and after some consideration, Geo joined them.

Therefore it was Frayne, Garrok and Uranyra who approached the gate.  They were somewhat taken aback by the size of the toll, which Frayne managed to pay.  When the guards made a further charge for the beast of burden, it was only met by Garrok offering one of the casks of brandy he had stolen while hiding in Kurlak’s cellars.  This was so warmly received that one of the guards advised them that “if they wanted a cushty deal” they should seek out his cousin Bravelthook.

The bazaar was hectic.  As soon as the travellers entered the narrow, crowded streets they were set upon by carpet sellers, food vendors and beggars.  Even Unayra was unable to intimidate the urchins, and in the end was forced to part good coin for an obsidian dagger (though she was secretly delighted with its dragon-motif).

Bravelthook proved to be the dodgiest of dodgy traders.  Having ensured that they were not observed, he whipped back a carpet to reveal six leather sacks.  These, he claimed, contained the finest unprocessed iron ore – worth a fortune.  Garrok quickly ate one of his enchanted fruit – in this case a pear endowed with the power of Divination.  Much to his surprise, this confirmed the elf’s story.  Negotiating was quickly settled: Garrok exchanged three of the casks of brandy for three sacks, while Frayne bought the other three with more conventional payment, Unraya, having spent her worldly wealth on the dragon dagger, watched on.  As soon as the deal was done, Bravelthook packed up his belongings and disappeared into the throng.

Meanwhile, as Gre’kkt, Fribb and Geo circumnavigated the walls, they noticed a storm in the far distance heading towards us.  They hastened to the Western Gate, only to find the rest of the party astonished at being charged to leave the oasis!  Gre’kkt could barely hide her amusement.

The party continued on its westward journey, keeping a wary eye on the approaching storm.  Geo’s weather-sense was that there was something un-natural about it.  Gre’kkt took out her auger stones and performed one of the druidic rituals of her kind.  “Does the storm have hostile intent?” she asked, “Yes” came the answer.  After travelling for a further half-hour, it was clear that we couldn’t outrun the storm and we prepared camp to hunker down.

As the storm enveloped the camp, blotting out what little light there was, the party heard the sound of many marching feet and were terrified to see an army of ancient, desiccated corpses approaching them.

Gre’kkt cast Turn Undead, but merely managed to make a slight parting in the oncoming wave of zombies.  It was here that Frayne’s true power as a Templar of Hamanu, Sorcerer-King of Urik, Lion of the Desert, became apparent.  As he blew his battle horn and cast Turn Undead, they obeyed his commands!  Over the next few hours, Frayne managed to Turn around 70 of the zombies, who formed a protective barrier between the party and the rest of the horde.  At dawn the storm dissipated and the zombies sank back into the sand: all except a company of 31 – the survivors of Frayne’s Undead Army.

These zombies continued to obey Frayne’s orders, and accompanied the party onwards towards Tyr.  Before we reached the city outskirts, Frayne ordered them to hide themselves in the dunes in the hope of retrieving them later.

Reaching the city was a blessed relief to the travellers, who had not rested for some time.   After being questioned by the Templars at the gates, who were told they were traders from Urik, they found a tavern and retired to the common room for glasses of fermented Kank Liqueur (for the Ladies) and pints of Tyr Brown Ale. 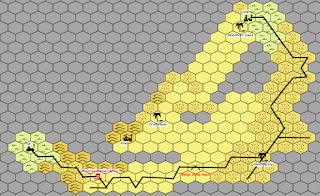