Francis Edward Younghusband was born at Murree, in the North West Frontier (now Pakistan), on 31 May 1863, the second son of Major (later Major-General) John William Younghusband and his wife, Clara Jane.  His uncle was Robert Shaw, the first Englishman to cross the Himalyas to Yarkland and Kashgar - Francis was to undertake similar work in 'the Great Game', whereby Russia and British India strove for influence in Central Asia.

He was educated a Clifton College, near Bristol, and the Royal Military College, Sandhurst, being commissioned into the 1st (King's) Dragoon Guards in 1882.  In 1886 he joined Sir Henry Evan Murchison James on an expedition into Manchuria and China, visiting areas unseen by Europeans for almost two centuries.  Younghusband returned from Peking to India via the Gobi Desert, the first European to cross it.

In 1889 he made further ventures into Central Asia north of British India, encountering Capt Grombehevski, who was doing similar work for the Russians.  Younghusband, now a captain, was attached to the Indian foreign department, and spent 1890-91 on a round trip to Kashgar - his encounters with Cossack patrols led to an international incident, and the British government forcing the Russians to back down in their plans to annex large swathes of territory next to Afghanistan.

Younghusband published an account of his journeys in 1896 as The Heart of a Continent: A Narrative Of Travels In Manchuria, Across The Gobi Desert, Through The Himalayas The Pamirs And Hanza, which brought him to public attention.  He also accompanied to Chitral Relief Force as a correspondent for the Times (and probably acted in some other, more shadowy, capacity).  He was awarded the Founder's Medal of the Royal Geographical Society and appointed a CIE.

Younghusband was appointed a political officer in Husan and made a friendship with George Curzon (later the 1st Marquis Curzon, Viceroy of India).

He again acted a as corespondent for the Times in 1897-98, this time in South Africa, where he reported on the Jameson Raid, and the disputes which were to lead to the Second Boer War.

In 1902 Curzon appointed Younghusband head of a mission to Tibet, who was feared to be negotiating a settlement with the Russians.  Younghusband, with a military force commanded by J.R.L. Macdonald, exceeded his orders and lead an invasion of the country.  Despite Younghusband's assurances that at 'we are not at war with Tibet and that, unless we are ourselves attacked, we shall not attack the Tibetans' conflict soon arose.  The Tibetans were hopelessly outmatched and a series of what can only be described as massacres followed.

Younghusband entered Lhasa in August 1904 and dictated terms to the Tibetan government, which paid an indemnity, recognized the Sikkim-Tibet border, and declared that Tibet would have no relations with any other foreign powers.

The invasion proved controversial in London, but Younghusband was eventually confirmed in his actions and advanced in KCIE.

From 1906 until his retirement in 1909, Younghusband was resident officer in  Kashmir.  He returned to England in 1910, and published India and Tibet.  He became prominent in the Royal Geographical Society, and served as it's president from 1919 to his death.  He was chairman of the Mount Everest Committee, which organised attempts to climb the mountain.  He was appointed KCSI in 1917.

Younghusband had become interested in spiritualism and Eastern Religions.  He published The Life in the Stars in 1927 and The Living Universe in 1933.  He helped in the organisation of the Conference of Religions of the Empire held in London in 1924 and founded the World Congress of Faiths in 1936.  His beliefs became increasingly bizarre, following a vision on the return from Tibet, Younghusband devised a new religion, arguing that there was a Supreme Being on an alien planet influencing events on Earth through telepathy and advocating Free Love.

Younghusband died at Lychett Minster, Dorset, the home of his mistress and follower, Lady Lees, on 31 July 1942.

Order of the Star of India
Knight Commander (KCSI), 1917 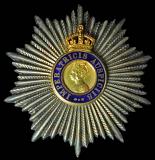