In Which Loki Saves My Bacon and I Break My Duck

Well, it's the end of the first week of this year's Analogue Painting Challenge, and already some top quality material has been submitted - it really is good to see other people's work gathered together.  I must admit to feeling a little out-classed though: some people seem to be able to knock out whole armies of figures very quickly.

I'm reassuring myself with the thought that among those who haven't as yet submitted must be some plodders like myself.  We shall see!  I imagine this weekend's bonus round will see a lot of new work.  How Curt's going to manage with 60 entries all at once (each with at least three photos), I don't know!

So what's the title about?  Well, I managed to submit my civilians last night (only two figures, but what the hey).  I'd deleted the e-mail with the submission guidelines, so I had to send a quick message to the Challenge Facebook Group asking when the deadline was and about photo sizes.  Then I found the e-mail and did a quick-and-dirty calculation that I had until 6pm tonight.  Loki proved a star by pointing out that it was 6am this morning!  Some quick flocking before bedtime ensued.  Thanks are also due to Sean for giving me the info about picture sizes.

More about my submitted figures when Rule 9 allows.

This is how my worktable looks at the moment. 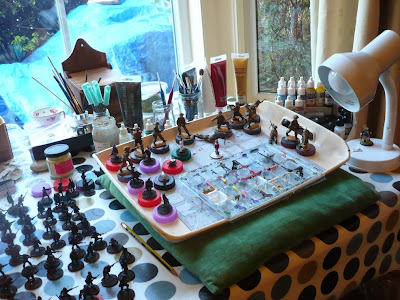 The eagle-eyed among you will see that it hasn't changed much since my last update (I'm going have to find a more imaginative way of photo-ing the desk).

I have to finish the nephew's 54mm troops by the morning (I should be on track there).  The Santa is finished, but I decided against submitting him last night.  I've got four civilian figures that are part-painted, a couple of whom I might hold over until the 'favorite' bonus round.  There's another figure that might do for either the 'villians' or 'vehicles' rounds (prob the latter, as I haven't got so many options for the former.  I've also lined up (ie, stuck to bottle-tops!) the next figures (who will be alright for 'villians').  After that?  Well, that'll be in the New Year.

We're going away for Christmas tomorrow.  I shall smuggle my laptop along, so will update you, but won't take any painting.
at 13:53