I'll be home from my short break tomorrow, so will be winding up the little experiment on tackling the to-read pile and removing the widget over on the right there ----->

I will reserve comment on the poll until it's over, but the current standing is as follows. 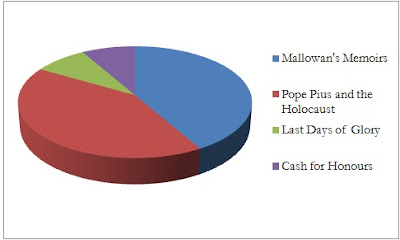 But being an impatient sort (and a little bored last night), I have started a new book.  It's Harold Temperley, Frederic The Great and Kaiser Joseph.   I just wanted to quote a passage from the preface


the Bavarian Succession involved nearly all the typical elements of eighteenth century diplomacy: the intense personal influence of rulers, naked aggression veiled by genealogical pedantry, the struggle for the "balance of power." the assertion of raison d'etat as a plea for all crimes, the rapier play of contending forces, the ruthless crushing of small or neutral Powers by the military aggression of larger ones.

When I read that i couldn't help but smile fondly and remember the play-by-blog game of Diplomacy the Mad Padre ran last year!
at 11:18